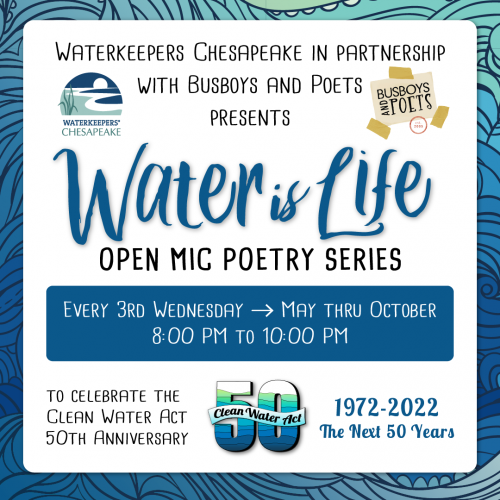 What does water mean to you? This special series of poetry events explore the undeniable fact that “Water is life.” Waterkeepers Chesapeake, in partnership with Busboys & Poets, hosts this series as part of the Clean Water Act 50th Anniversary Campaign. Everyone has the right to clean water. We need it to keep our bodies healthy, our communities safe, and our economies strong.

For five decades, the Clean Water Act has protected our waterways and stopped practices such as the discharge of completely untreated wastewater. But we still have work to do. Our DC rivers, while vastly improved since the 1970’s, still experience sewage overflows and legacy toxic pollution. Too often, our low-income and marginalized communities are the ones most harmed by flooding, polluted waterways and historical disinvestment. We hope this poetry series will lift up the stories from these communities, as well as speak to the spiritual and healing connections, and fun times humans have with water.

This event is part of a series on the 3rd Wednesdays May through October:

To learn more about the Clean Water Act 50th Anniversary campaign and other events go to: https://cwa50.org

Learn about Waterkeepers Chesapeake at https://waterkeeperschesapeake.org

Seating is available on a first come, first seated basis. No saved or reserved seats are allowed. Failure to check-in within 30 minutes of advertised start time may result in a forfeiture of seats.