Follow along for the Busboys and Poets Travel Tribe’s Cultural Exchange trip to Cuba (July 6-13, 2022)

Seconds after takeoff we are mingling with the clouds. I find my way to the bathroom. I am relieved and back in my seat. I am one of a handful of people in the back half of the plane. I look out the window and see endless blue below. This vastness is only interrupted by floating white puffs. Everything is so still. I am excited and relieved. Amazed that I made it just in the nick of time. Thankful that I am here. Alive. Today.

I love flying. It reminds me of how small I am in relation to this magnificent planet. And in that feeling of smallness. That feeling of “vulnerableness”. I feel more connected. More human. More alive.

This will be my 3rd time going to Cuba. And I know this time it will be different.

Since the Cuban revolution of 1959, the Cuban economy depended on the USSR. For fuel. Grain. Raw materials. Military aid. You name it. When that spigot was cut off in 1992 things changed drastically. The Cubans call it the “special period”. A time of belt tightening. Self reliance. And deprivation. Despite all that. Cuba continued to survive. And in some cases even thrived. Organic farming took off. Reusable energy ramped up. Military spending cut drastically. Social services and food rations increased. Health care became a priority. And the arts and the creative economy flourished.

Then Obama took office. And things began to look up. Ambassadors were exchanged. Trade ramped up. Cruises filled up. Tourists came in droves. Hotels were overbooked. New private restaurants called “paladars” opened. Obama and Michelle visited. As did Beyonce and JayZ. And a slew of celebrities and ordinary folks followed. The Cuban economy began to strengthen. All this came to a screeching halt when Trump took office. Not only did he end diplomatic relations. But he went one step further. He designated Cuba as a country that sponsors terrorism! A label only bestowed upon North Korea, Iran and Syria.

Since then. Things have gotten much worse. Tourism which used to number in the millions is now a mere few hundred thousands. Remittances (the money people send relatives) have all but stopped. Trade with the US is a bare trickle. You can see it. The crumbling infrastructure. The empty restaurant seats. The low hotel occupancy. The empty planes.

Our visit to Cuba is to see this first hand. This is a cultural trip. Not a political one. It is meant to open opportunities for dialogue and understanding between people in the United States and the Cuban people. I hope you will join me as we explore this island nation together.

Cuba is about 800 miles long. And very narrow. In some spots you can get from one coast to the other in 15 minutes. And for its size. With just 11 million people. It has had an enormous impact. Geopolitically speaking.

Looking out the window from my back seat on this charter plane, the outline of the island appears. There is green as far as the eye can see. And deep blue water in all directions. As we get closer. You begin to see mountains and rivers. And gorgeous beaches with sand as fine as dust and water as clear as a mountain spring. We will be visiting some of those. Within minutes of take-off we begin to descend. Excitement rises as we get closer and closer to touchdown. And then applause breaks out once the wheels touch the ground. And right in front of us. In big letters. Is the Jose Marti International Airport. We stop at the bottom of the steps and pose for pictures and move inside the terminal. We breeze through customs. And we are off to the Hotel Nacional. And the adventure begins.

This is why we feel good about what we serve

In Love Poems, Nikki Giovanni gives an empowered edge to the topics of sexuality, intimacy and what it means to love. Published in 1997, the collection’s poems span thirty years of her career as a writer. We hear Giovanni through many lenses: as a young woman, as an activist striving for change, as a lover, … Continued 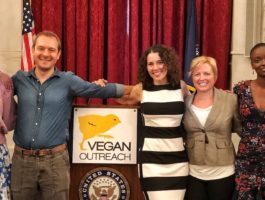 The Transitioning to Vegan panel, hosted by the Congressional Vegetarian Staff Association’s Maureen Cohen Harrington and Adam Sarvana took place today at the Russel Senate Office Building. It was a packed house with some awesome vegan advocates and a great introduction to the upcoming DC VegFest celebration highlighting vegan businesses and products. The panel included: … Continued