Who needs ambassadors when we have poets?

Why wait for ambassadors when we have poets?”

That was Washington writer E. Ethelbert Miller’s reaction when he heard that two distinguished Cuban poets were coincidentally visiting from Havana this week to participate in an equally coincidental movable feast of Latin American poetry events continuing through the weekend.

“Art is a no-man’s land,” Cuban poet Nancy Morejón said over morning tea at the Adams Morgan home of Andy Shallal, owner of Busboys and Poets. “I like to say that what happened last year on December 17″ — when President Obama and President Raúl Castro announced an attempt improve relations — “was advanced by writers and artists. We have been working a lot for the arrival of that day.”

Efforts to build cultural bridges began in the late 1970s, Morejón said, and she cited the late Washington filmmaker Saul Landau and the late Cuban American writer Lourdes Casals among those who contributed.

“We started to break silence and to break barriers,” she said. “And finally the governments did well in talking to each other to face our problems in a very civilized way.”

Now the diplomats are gingerly stepping toward the day when the two nations might exchange ambassadors again.

“No! No! No!” Morejón cried in surprise as they embraced. “This guy is like my son. I don’t say that because I am older” — both were born in the mid 1940s — but because Morejón helped Leyva publish his first book of poetry. “That’s almost like maternity.”

The reunion was made possible by some mysterious orchestration of the poetry gods who apparently decided this was the week for a mini explosion of Latin American poetry in Washington. To have it occur just when maximum attention is focused on the evolving relationship between the two nations made it all the more uncanny.

Leyva offered his own take on the new diplomatic era and the role of the poet: “Every epoch has its own rhythm, light and humanity, and the poet has to be capable of unlocking the codes of his epoch. … The sign of this epoch is dialogue, not war; conversation not confrontation.”

Leyva was in town for the annual Spanish-language Poetry Marathon hosted by Teatro de la Luna, the Hispanic Division of the Library of Congress and the library’s Hispanic Cultural Society. Three days of readings included the presentation of two important anthologies of Latin American poetry to the library: “Poesía de América Latina Para el Mundo” (“Latin American Poetry for the World”), a bilingual edition of 43 living poets from 19 countries, compiled by Mexican poet Roberto Arizmendi. And: “El Oro de los Tigres,” an ambitious multi-volume project to translate the world’s greatest poetry into Spanish, published by the Capilla Alfonsina at the Autonomous University of Nuevo León in Mexico.

Leyva recited one of his most famous poems, “Definitivamente Jueves” (“Definitely Thursday”). Playing with the passage of time, as he does in a number of works, Leyva has his narrator imagining a date decades hence and wondering what will have become of him and his lover and the world.

Some of the other poets selected pieces that were more direct social commentaries. Masin addressed domestic violence in one. Villarreal took on the breakdown of order in Mexico with two short, sharp pieces that alluded to the disappearance of 43 students last year and the culpable indifference of leaders.

“In the political capital of the world, there has to be a place for poets,” said Berroa, a professor of Spanish literature at George Mason University, who has been organizing the marathon with Teatro de la Luna for more than two decades.  “With all due respect to the English language, there are so many things that go on in English that we feel that is is essential that we give this huge community of people in the area a place to breath Spanish, the Spanish culture, and especially poetry which is so dear to the Spanish-speaking people.”

The marathon continues Saturday [June 6] from 2 to 8 p.m. at Casa de la Luna, 4020 Georgia Ave. NW. Admission is free (donations are welcome). Members of the public can join the international poets in reciting poems, and an anthology of this year’s poets (“Lengua del Alma la Pluma”) will be for sale.

Meanwhile, Morejón was in town to participate in readings and discussions at the Takoma Busboys and Poets, where Shallal has dedicated the performance space and a mural to the late Cuban poet Nicolás Guillén. Guillén infused his poetry with Afro-Cuban musical rhythms and everyday speech, and focused on social injustice. He traded inspiration with Langston Hughes, Shallal’s founding muse for Busboys.

Morejón and Shallal led a discussion of Guillén and Hughes Friday evening at the Takoma Busboys, and she was scheduled to participate in a talk about the dynamics of race in the United States and Cuba from 5 to 7 p.m.  Sunday [June 7] at the Busboys on 14th Street NW.

Morejón also took the opportunity to join a portion of the poetry marathon at the Library of Congress. One of the pieces she recited was her poem “Divertimento for Guitar,” which contains a subtle nod to U.S.-Cuban relations. Some lines in translation:

I love passports: When will passports cease to exist?

I love the eagerness of the day and the taverns

and the guitar at twilight.

I love an island caught in the throat of Goliath

like a palm tree in the center of the gulf.

From Head Shops to Whole Foods by Joshua Clark Davis is a scholarly examination of activist entrepreneurs who use business as a tool to enact social and political change. It’s a far-reaching subject to dedicate this sort of academic rigor to, and the author limits his examination to four subjects: African American bookstores, head shops, … Continued

From the bride: “Obi proposed during a double dinner date at Busboys & Poets – Shirlington the day before my birthday, also the location of our third date.” 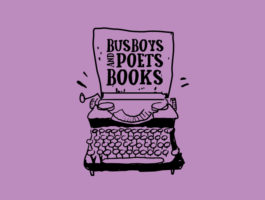 intermittent apnea of unknown causation   I. the first time it happened i thought i was being strangled four fingers compressing each side of my throat no air II. have you ever eaten crabs? first you flip the breast tab up then you fold the crab back like the binding of a new book then … Continued