This Independence Day, Thank a Protester

This Independence Day, Thank a Protester

More than 160 years ago, the greatest abolitionist in U.S. history, the escaped slave Frederick Douglass, addressed the Rochester Ladies’ Anti-Slavery Society. Douglass asked those gathered, “What, to the American slave, is your Fourth of July?” His words bear repeating this Independence Day, as the United States asserts unprecedented authority to wage war globally, to spy on everyone, everywhere. Independence Day should serve not as a blind celebration of the government, but as a moment to reflect on the central place in our history of grass-roots democracy movements, which have preserved and expanded the rights proclaimed in the opening lines of the Declaration of Independence: Life, liberty, and the pursuit of happiness.

Douglass answered his question about the Fourth of July, to those gathered abolitionists: “To him, your celebration is a sham; your boasted liberty, an unholy license; your national greatness, swelling vanity; your sounds of rejoicing are empty and heartless; your denunciations of tyrants, brass fronted impudence; your shouts of liberty and equality, hollow mockery; your prayers and hymns, your sermons and thanksgivings, with all your religious parade, and solemnity, are, to him, mere bombast, fraud, deception, impiety, and hypocrisy—a thin veil to cover up crimes which would disgrace a nation of savages. There is not a nation on the earth guilty of practices, more shocking and bloody, than are the people of these United States, at this very hour.”

Douglass not only denounced the hypocrisy of slavery in a democracy, but worked diligently to build the abolitionist movement. He fought for women’s suffrage as well. These were movements that have shaped the United States. The civil-rights movement of the 1950s and ‘60s set a permanent example of what can be achieved by grass-roots action, even in the face of systemic, violent repression.

Today, movements continue to shape our society. The trial of George Zimmerman, accused of murdering Trayvon Martin, would not be happening now in Florida were it not for a mass movement. Sparked by the seeming official indifference to the shooting death of yet another young, African-American male, nationwide protests erupted, leading to the appointment of a special prosecutor. A month and a half after Martin was killed, Zimmerman was charged with second-degree murder.

Gay men and lesbians have seen sweeping changes in their legal rights, as same-sex marriage become legal in state after state, the U.S. military has dropped its official discrimination against homosexuality, and the federal Defense of Marriage Act was recently judged unconstitutional. Again, undergirding this progress are the decades of movement-building and grass-roots organizing.

In Egypt, the revolution dubbed the Arab Spring continues, with mass protests forcing out President Mohamed Morsi. Where this goes now, with the military in power, is yet to be determined. As my “Democracy Now!” colleague, Sharif Abdel Kouddous, tweeted from the streets of Cairo on the night of the military coup, “After two and a half years, Egypt just went back to square one in its post-Mubarak transition.”

The United States has been for well over two centuries a beacon for those around the world suffering under tyranny. But the U.S. also has been the prime global opponent of grass-roots democratic movements. Amazingly, South African President Nelson Mandela and the African National Congress were not taken off the U.S. terrorist watch list until 2008. When the people of Chile elected Salvador Allende, the U.S. backed a coup against him on Sept. 11, 1973, ushering in the dictatorship of Augusto Pinochet, who murdered thousands of his own citizens, crushing dissent. Sadly, drone strikes and the U.S.-run prison at Guantanamo are not historical references; they are current crimes committed by our own government.

Now, National Security Agency whistle-blower Edward Snowden, as far as we know, is stranded in the Moscow airport, his U.S passport canceled. He has admitted to revealing a vast, global surveillance regime that has outraged citizens and governments the world over. He joins in his plight imprisoned whistle-blower Bradley Manning, who faces life in prison, being court-martialed now for leaking the largest trove of classified documents in U.S. history. WikiLeaks founder Julian Assange has now spent more than a year cooped up in the Ecuadorean Embassy in London. These three are central to the exposure of some of the most undemocratic practices of the U.S. government.

More than 100 protests are planned across the U.S. this July Fourth weekend, in opposition to the NSA’s surveillance programs. These protests are part of the continuum of pro-democracy struggles around the world. In closing his Rochester, N.Y., speech, Douglass sounded an optimistic note, saying, “Notwithstanding the dark picture I have this day presented, of the state of the nation, I do not despair of this country.” Grass-roots justice movements are the hope, the beacon, the force that will save this country.

Amy Goodman is the host of “Democracy Now!,” a daily international TV/radio news hour airing on more than 1,000 stations in North America. She is the co-author of “The Silenced Majority,” a New York Times best-seller. 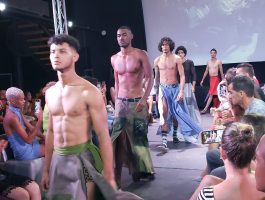 Reflections from the Busboys and Poets Travel Tribe’s Cultural Exchange trip to Cuba (July 6-13, 2022)  Of all the places I visited in Cuba. Of all the events. The panels. The museums. The sights and sounds. The Fabrica De Arte Cubano (aka Fabrica) stands out. An old repurposed oil factory. Transformed into a multi level. … Continued

Gourmet ketchup anyone? The Sunrise Tea House serves the best French fries I’ve had. Real potatoes fried and sprinkled with Himalayan salt and gourmet ketchup. The thick dark kind made of real tomatoes with a hint of plums (I am making up the plums, but it sure tasted delicious). I ask for Wifi. The owner … Continued