The Green Festival D.C. Launch Party was a major success with nearly 100 attendees from the local green community celebrating Green Festival’s 10th year in the nation’s capital. The event was held at Busboys & Poets, and guests included exhibitors, small business owners, media and environmental advocates, all helping to make Washington, D.C. a more sustainable city. Attendees enjoyed delicious foods and drinks compliments of our host, Busboys & Poets. Step Afrika! put on a show-stopping surprise performance as a preview for what they have planned for their presentation at the upcoming Green Festival, which will be held May 31st – June 1st at the Washington Convention Center.

Brendan Shane, Director of the Office of Policy and Sustainability at the District Department of the Environment, welcomed the D.C. crowd and delivered opening remarks. Brendon proudly described the many green categories in which Washington continues to lead the nation. Dr. Corinna Basler, President of Green Festivals, Inc., was introduced by Brendon and spoke excitedly about last weekend’s Green Festival event in New York City, and the upcoming festival in Washington, D.C. Dr. Basler emphasized the importance of local partnerships in Washington and thanked Sustainable DC, Habitat for Humanity, Fashion Fights Poverty, Greenease, Grassfed Media, FRESHFARM Markets, and Veteran Compost for their support. Finally, she announced the Green Festival Community Award and Green Festival Brand Award, two new awards for the Green Festival event in Washington, D.C. Many guests began voting for their favorite green brand during the party and were entered for a chance to win the Super Green Shopper Prize.

Launch PartyThe Green Festival launch party also featured a number of Green Festival exhibitors that provided a taste for what they plan on offering at the upcoming festival. Exhibitors sampled products and discussed their brands with media, tastemakers and green consumers. Exhibitors that attended the party included Balance Power Systems, Beanfield’s Snacks, The Big Bad Woof, Bill’s Best Organic BBQ, BluApple, Dr. Bronner’s,  the Environmental Law Institute, Ever Bar, Red Dragon, the Holistic Moms Network, Imagine Greenwear, Nature 4 Real, Prior Unity Garden, Relay Foods, Route 11 Potato Chips, SeaSnax, Sibu Sura Chocolates, SoapBox, Sunwarrior, Truly-Life, The One Eyed Turtle, WhistleBlower.org, Center for Leadership in Global Sustainability, Wonderfully Raw and Wholesome Sweeteners.  In keeping with Green Festival’s commitment to reducing our impact on the environment and being a zero-waste event, Veteran Compost collected and removed the food waste at the conclusion of the launch party. Busboys & Poets was the perfect venue for the D.C. kick-off party, and attendees left with gift bags to sample what’s to come at the Washington Convention Center May 31st and June 1st.

We at Busboys and Poets are distressed at the senseless violence against Black men, women, children, and Black people of all genders that has become all too commonplace in this country. Not a day goes by that we don’t see a video, a Tweet or a Facebook post of a Black person facing assault or … Continued 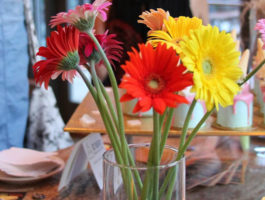 Delight a friend, family member, co-worker or maybe even yourself with a gift cards to Busboys and Poets! Our gift cards can be used to purchase food (mmm sweet potato pancakes), drinks (Langston Cooler, anyone?), books and any other items sold at our bookstore. This includes Busboys merch, notebooks, cards and other fun gifts. Send a physical … Continued

Tickets include open bar, open food, live music, dancing, and speeches by distinguished guests. ALL exhibits will be open to guests: http://busboysandpoets.com/events/info/2017-inaugural-peace-ball