Split This Rock Poem of the Week: Karenne Wood

The Poet I Wish I Was
1. A white poet whose work I admire said she feels most inspired on her daily four-mile walk through a forest.
2. I wish I had time to walk four miles daily. I can usually manage one mile with dogs. My dogs are distractible, and they distract me.
3. The Native poet I wish I was gets up early to walk dogs through a forest and comes home to her desk overlooking a lake. She spends half the day swimming with dogs, the other half reading and writing. Dogs are pleased. She is mostly inspired.
4. The poet I wish I was travels around like a famous Indian poet I know, reading and speaking and accepting awards. I don’t care much about awards–I just want my poems to be better, like his. (That’s a lie. Every poet wants all of the awards.)
5. The famous Native poet kept writing about his dead father. He said he’s made mostly of his dad. “Like water.” It’s a short poem.
6. The poet I wish I was spent her childhood walking through a forest, because that’s where Indians belong, right? She didn’t spend her childhood wishing she could be a child whose father didn’t leave, believing it was her fault, then seeking out men who would leave her.
7. I never wanted to be that famous Indian poet. I wanted to be his best friend or his older sister. The one who walked out of that drunken house fire in Montana. The sister who lived.
8. I wanted to be that poet’s father. The one who didn’t die of kidney failure, alcohol related. The Indian father who lived.
9. I wanted to be my own father. The one who didn’t die of cirrhosis, alcohol related. The Indian father who lived. I wanted to be my own father so that he could still be alive.
10. How fucked up is that?
11. The poet I wish I was is grateful to Indian fathers who stay alive, who work hard so their kids don’t go hungry. Who want to be better, like my brother, who is a good father. We all just want to be better.
12. My kids never went hungry. They ate canned corn and baloney for years.
13. Many of the poets I admire have leapt or fallen from the perches where I stuck them carefully like plastic Jesuses, again and again.
14. However good we are, we can’t change the beginning or the middle–we can only try to rewrite the end.
**
From New Poets of Native Nations (Graywolf, 2018)
Used with permission.
Photo by Jessica Elmendorf.
Karenne Wood is an enrolled member of the Monacan Indian Nation who directs Virginia Indian Programs at the Virginia Foundation for the Humanities. She holds a MFA in poetry and a PhD in linguistic anthropology. She has worked at the National Museum of the American Indian as a researcher and at the Association on American Indian Affairs as a repatriation specialist. In 2015 she was honored as one of Virginia’s Women in History. Karenne is the author of two poetry collections, Markings on Earth (2000) and Weaving the Boundary (2016). Her poems have appeared in such journals as The Kenyon Review, Orion, and Shenandoah.
To read more poems of provocation and witness, please visit The Quarry: A Social Justice Poetry Database at SplitThisRock.org.

#BusboysGood is a blog/Instagram series that profiles all the good folks who frequent Busboys and Poets. They are what make our tribe one. 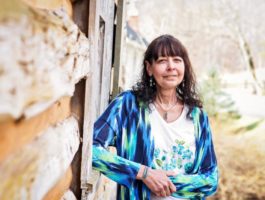 The Poet I Wish I Was    1. A white poet whose work I admire said she feels most inspired on her daily four-mile walk through a forest. 2. I wish I had time to walk four miles daily. I can usually manage one mile with dogs. My dogs are distractible, and they distract me. … Continued

We’ve all been in that situation, or know someone who has. You find yourself for whatever reason in need of medical attention: a surgery, an exam, etc. And after you leave, you receive the bill. But the bill is far larger than you anticipated and you have no idea why. Elizabeth Rosenthal knows why. An … Continued