Right to Know Our Food

Given that many Americans are becoming more aware of what we put into our bodies suspicions about the health and environmental effects of biotechnology are on the rise, fueling a movement to require food from genetically modified crops to be labeled or otherwise taken off the shelves.

Alternet reports that, “In November, California voters will vote on a law (California Right to Know Genetically Engineered Food Act) to require mandatory labeling of all GMO ingredients in processed foods and ban the industry practice of mislabeling foods containing GMO ingredients as natural.”

The labeling effort, supported by consumer groups and the organic food industry is pitted against the agricultural biotechnology companies like Monsanto, and argue that we have the right to know when food has been modified with genes from another species.

“Will democracy win out and will Americans have the right to know what’s in our food? Or we will continue to let our food policy be ruled by political decisions engineered last century in a Monsanto boardroom by corporate lobbyists?”

In case you’re also skeptical about GMOs, you may want to check out this iPhone app: ShopNoGMO

You send us your poetry and we publish them on our blog! Send your poem to events@busboysandpoets.com and it may show up! 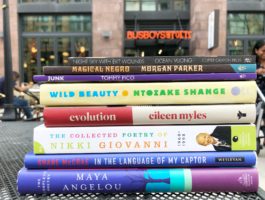 We celebrate poetry every day in our spaces. From the art, to the books, to our Tribe (several who are poets!), poetry surrounds us and we wouldn’t have it any other way. Whether it’s an Open Mic Night or just grabbing a few books of poetry to read, there’s no wrong way to celebrate with … Continued