“In D.C. Debate, Third-Party Presidential Contenders Decry a System Stacked Against Them”

One of them wants a green New Deal. Another wants to scrap the tax code and impose a single consumption tax in its stead. A third wants to crack down on immigrants—both legal and illegal—until unemployment is at five percent, while a fourth wants to cut the military budget by half. These, U.S. voters, are your third-party presidential contenders.

Yesterday at Busboys and Poets the Green Party’s Jill Stein, the Libertarian Party’s Gary Johnson, the Constitution Party’s Virgil Goode, and the Justice Party’s Rocky Anderson squared off in a presidential debate moderated by one of the monuments of third-party candidacy, Ralph Nader. During the two-hour debate, the hopeful candidates may have differed on how to address some of the nation’s most pressing issues, but agreed that the two parties that dominate American politics are driving the country to ruin.

“Instead of a democracy, we have plutocracy. Government of, by and for those who buy our White House and our Congress,” said Anderson, a former mayor of Salt Lake City who will appear on the ballot in 14 states. “The Republican and Democratic parties have a stranglehold on our electoral system, making it virtually impossible for anyone other than wealthy parties or candidates to even get on most state ballots.”

For all four, it’s not just an electoral system stacked against them, but also a corporate-owned media that doesn’t cover them and a system of presidential debates that excludes them.

Johnson, a former two-term governor of New Mexico, complained of having been ignored by CNN, even though he has been said to be polling as high as 10 percent in key states like Ohio. (Johnson will appear on most state ballots, D.C. included.) For her part, Stein was arrested outside of the presidential debate at Hofstra University in mid-October, where she had demanded to be allowed to participate.

In opening the debate, Nader hailed the value of third parties, saying that the dared take positions on vital issues that the two major parties tend to ignore. “Historically, third parties in America have pioneered agendas opposed by the larger two parties but eventually accepted by them. These included the abolition of slavery, a women’s right to vote, safeguards for workers and farmers, and many other reforms such as Social Security, consumer protection, civil rights, and Medicare,” he said.

Despite their varying ideologies, there were moments of political convergence. All four said that they opposed corporate welfare and saw crony capitalists as the biggest influence on American policymakers, and the entire group agreed that the Defense of Department’s budget needs a thorough audit and that the U.S. should pull out of Afghanistan and avoid any future military entanglements. The four would repeal the Patriot Act and renegotiate NAFTA, and three of the four said they would welcome D.C. to the union as the 51st state. (Goode said he favored retrocession into Maryland.)

On some issues, though, the right-left divide between the four candidates became evident. While Stein and Anderson were more likely to support massive government programs to provide jobs, Johnson and Goode pledged to slash government and largely do away with the current tax system. (Johnson sided with the Fair Tax, while Goode said he preferred a national sales tax.)

On energy policy, Stein and Anderson sided with renewables, while Johnson said that the free market should be allowed to determine which energy source is most cost-effective in the long-run. For Goode, who was the sole candidate to say that he questioned the links between global warming and the storms that have hit the country, the wave of the future is in hydrogen. “Watch out for hydrogen,” he said.

Stein said she backed stricter limits on campaign contributions, while Johnson said that limits only end up benefiting incumbents. What’s needed, he said, is more transparency. For Goode, the biggest foe in U.S. elections is super PACs, which he pledged to do away with. Stein and Anderson both said that the minimum wage has to be increased to $10.60, a policy that Johnson said he opposed. All but Goode were in favor of same-sex marriage and immigration; the former Virginia congressman would take a hard line on traditional marriage, legal and illegal immigration, and abortion.

And as expected, the S-word came up: were the candidates afraid that they would spoil the election for President Obama or Mitt Romney? Stein rejected the accusation, saying that the major parties had spoiled the environment and the country’s educational system. Johnson agreed, saying that the American people “need a leader, not the lesser of two evils.”

That’s certainly true, but it would also seem hard to deny the reality that even supporters of the four candidates grudgingly concede: Stein might be better than Obama on the environment, for one, but Obama would still be much better than Romney. The same dynamic applies to the right-leaning third-party candidates: Goode might be strongest in his opposition to same-sex marriage, but Romney is more inclined towards “traditional” marriage than Obama is.

In terms of any potential spoiling, Goode’s candidacy in Virginia is giving Romney’s campaign team nightmares, with Goode polling at one percent in a state that might be decided by something smaller than that. Virginia Republicans tried to keep Goode off of the ballot, though they didn’t succeed.

But for as much as each of these candidates seemed blissfully convinced that they could win, Johnson came off as the biggest pragmatist of the bunch: his goal, he said, was to get five percent of the vote nationally so that the Libertarian Party could qualify for federal funds in the next general election. Bruce Majors, a Libertarian challenging D.C. Del. Eleanor Holmes Norton, has taken the same approach: he says that his first goal is to get 7,500 votes, which would grant the local Libertarian Party “major party” status.

In D.C., both Stein and Johnson appear on the ballot. And because D.C. is so heavily Democratic and will surely deliver its three electoral votes to Obama, voting for either of the two of them is certainly less risky than it would be in more closely contested states. 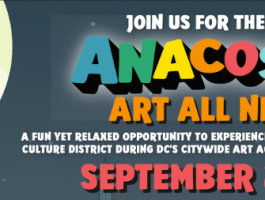 Visitors are invited to travel by car, bike, moped, or pedicab to fully immerse themselves in this journey into artistic and creative expression

In his second poetry collection, Remi Kanazi takes the reader on a journey of violence and collective ignorance from Palestine to Ferguson to Iraq to Brooklyn. His unapologetically angry, graphic depictions of violence and fierce indictment of the ignorant among us who claim “the world is a messed-up place” but do nothing to stop it … Continued