Quaint is the word.

I am starving. The lack of sleep and exhaustion makes me famished. To my surprise, the menu at this tea house (as in every tea house along the route I come to learn) looks like any roadside diner along I-95 South. It’s even laminated. The only thing missing was, the “hi ya’ll”. It is now replaced with “Nemaste”. Everything sounded so good to this hungry jack. I order half the menu. Then comes the disappointment. This ain’t Georgia or South Carolina. I felt like such an ignorant tourist. Of course this ain’t the South. This is Lukla, Nepal. About as far from The South as anything I’ve been to. I’ll spare you the description of my “banana pancakes”, “eggs with hash browns” and “fresh oatmeal served with hot milk”. What I can tell you, though, is that I am leaving this dreamy tea house hungry and munching on a power bar! Lesson learned: When in Nepal, just do Nepal.

I ask if they have a bathroom at the tea house. The owner points me to a hut outside with two unmarked doors. I open one and I am in nostalgic heaven. It’s a hole in the floor with two foot steps on either side. The kind of bathroom we had in my house growing up in Iraq. But rather than a chain you pull to flush, there is a bucket with a faucet that shoots water about as cold as water gets before freezing. Sitting there I was wishing I had brought some napkins with me. Boy was that water cold!

I walk out of the bathroom and admire the sheer heavenly beauty surrounding this place. The type that I am incapable of describing in words. If I was a believer, I would say God did this. But I’m a skeptic. So I chalk it up to some alchemy that the world owed me for being alive. So there! These are mountains that are so majestic. So imposing. You cannot help but feel something. A tear rolls down my face. And we’re not even close to Everest. I am going to be a mess!

We strap on the backpacks and off we trek. The first step to many many thousands. I’ll try to refrain from using the word quaint, but this one time. Lukla is quaint as shit. It is adorable. It is the type of town you find in those shake em up snow domes. There is a stone paved walkway that cuts through the village. It is old but super clean. There are shops on both sides with trekking trinkets. Dogs are sleeping everywhere in the middle of the walkway, on stoops, on top of roofs. It was sad to see that we were the only outsiders there. But sad as it may be I was not going to buy anything that I would have to carry on my back for 80 miles.

Then there are the crows! What’s with the crows? They soar and glide thinking they are eagles. It’s crazy. There are no eagles or hawks. I don’t mind the crows here, I can pretend along with them, but their sound is so ugly. That bullfrog squack. How hideous. I guess its their mating call, but who wants to get laid by someone who emits such an aggressively unattractive sound. Not me for sure. And that probably suits the both of us just fine.

I am told that this is supposed to be the easy day of the hike. Lots of ups and downs and about 12 km. Come to learn after just a few km, that their idea of easy is not the same as that of the Shenandoah National Park hiking guide. This hike would definitely be rated moderate or maybe even strenuous back home. It was definitely doable but a walk in the woods it ain’t.

We cross the first of 3 metal hanging bridges decorated with Buddhist peace flags. They click and clank and roll in waves as you walk. It’s easy to lose your balance especially carrying a 10 kilo backpack. You just have to not think about it. Don’t look down. And forge ahead as if your life depended on it. It does! The bridges criss cross over a powerfully surging fairy tale like river that is milky turquoise. The locals call it “Milky River”. No one was able to tell me how it got milky.

Along the path there is a handful of little villages that are equally, I won’t say it, but it starts with q. There are kids walking up and down these stony trails. The older ones are dressed in uniforms for school. The sound of children playing is everywhere. We pass herds of donkeys. These are the mountain Ubers. They transport everything up and down these mountains. Fuel, sugar, rice, you name it. Even people sometimes. A goat or two. And lots of yakkity yakking crows.

We stop for lunch along the way at another tea house overlooking Milky River. Again we are the only diners there. They feed us Dal Bhat and I am satisfied. The TV in the background is showing weird cartoons with very aggressive fighting Ninjas. The two kids of the family that runs the tea house are mesmerized by the action. Another visit to the toilet. This time I’m standing. And off we go.

We are nearing the end of day one and in the distance is the village of Phakting, our first overnight destination. My guide points it out to me and I am just about ready to kiss him. Instead, I say, “oh that was quick”.

By the time we reach The Sunrise Tea House, where we will be spending our first night, I was ready to kick back and relax. This tea house is quite large. Probably can hold about a hundred guests. Today however it had a bit of a Bates Motel feel. We were the only ones there and they were thrilled to see us. More later. Gotta keep trekkin’ 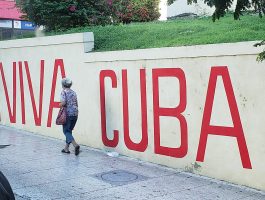 Our visit to Cuba is to see this first hand. This is a cultural trip. Not a political one. It is meant to open opportunities for dialogue and understanding between people in the United States and the Cuban people. I hope you will join me as we explore this island nation together.

Emma Gray’s tiny book of feminist resistance promises to be a guide to doing more and doing good in a world that seems to have turned against women all together. The book is extremely readable and well-put together, starring personal anecdotes, interviews with amazing activists, and step-by-step guides made to help us as readers do … Continued