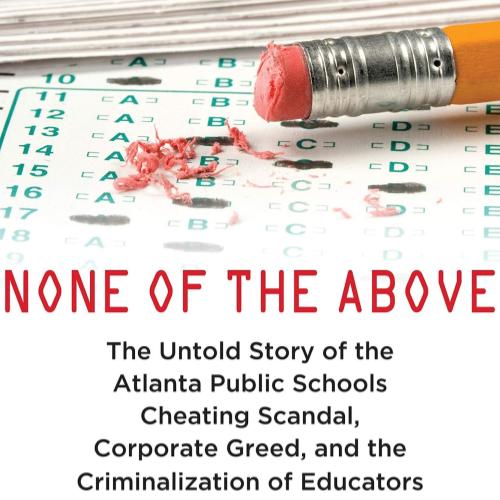 Busboys and Poets Books & Teaching for Change welcome Shani Robinson and Anna Simonton for their book None of the Above.

The 2009 Atlanta Public Schools (APS) cheating scandal was the subject of national headlines, especially because then superintendent Beverly Hall, who was hailed as a corporate-friendly reformer in urban education, faced a stunning fall from grace. Including Hall, thirty-five APS employees were indicted on RICO charges; all but one are African American—and some face prison terms of up to forty years.

The trial that eventually followed was the longest and most expensive in Georgia’s history. One of those charged and ultimately convicted on April 1st, 2015 was Shani Robinson, at the time a thirty-year-old former first grade teacher, a Teach for America alumna, and nine days after being convicted, a new mother. Now, in NONE OF THE ABOVE, Robinson, along with journalist Anna Simonton, chronicles her story while offering a comprehensive exposé of who really cheated the children of Atlanta. The authors show how APS employees were collateral damage in a crisis caused by an education reform movement that is increasingly shaped by business interests—interests that have for years been decimating black and brown schools and neighborhoods in Atlanta and beyond.

Shani Robinson, an alumna of Tennessee State University, is an advocate for troubled youth and their families. She taught in the Atlanta Public Schools system for three years.

Anna Simonton is an independent journalist based in Atlanta and is an editor for Scalawag magazine. Her work has been published by the Nation, In These Times, and AlterNet, among others.