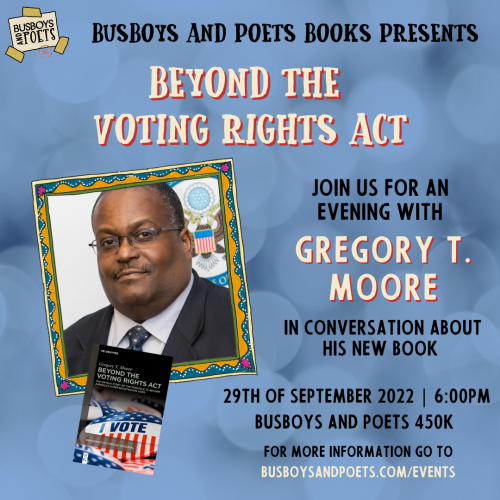 Busboys and Poets Books Presents BEYOND THE VOTING RIGHTS

Join us to learn about the under-reported period of voting rights advocacy in the 1980s and early 1990s.

Author Gregory T. Moore is considered one of the nation’s leading voting rights advocates. For the past 30 years, Moore has held several key roles in Washington, including serving as the executive director of the NAACP-National Voter Fund, coordinating national programs promoting voting rights and registering more than 500,000 voters nationwide throughout his career. Previously, he served as legislative director and chief of staff for Congressman John Conyers, where he helped steer the final passage of the National Voter Registration Act of 1993 (The “Motor Voter” Act). Moore also led the effort that established the first 50-state election protection program for the Democratic National Committee and state parties throughout the U.S.

In the book, Moore tells the story of the fight against voter suppression from his own perspective, beginning as a young, African American man from Cleveland in the 1980s who reluctantly became involved with this movement as a student activist and inadvertently rose to become an integral part of legislative history.

The book provides historical context to the struggle for democracy, including Jesse Jackson’s historic campaigns in 1984 and 1988 and the passage of the Motor Voter bill, which allowed people to register to vote and update their address at state driver’s license facilities. As well, Moore speaks on the more recent push to restrict voting rights, from the Supreme Court’s Shelby decision in 2013, which allowed more states to impose new voting restrictions that helped facilitate President Trump's early campaign.

Clarence Lusane, a noted political science professor at Howard University says, “As this generation wages its own battles against a tsunami of voter suppression legislation and an insurgent authoritarian movement, Moore’s insights, experiences, leadership, and guidance is more urgent than ever. Any and everyone concerned about the democratic future of the United States needs this book.”

This event is free and open to all. Our program begins at 6:00 pm, and will be followed by an audience Q&A. Copies of BEYOND THE VOTING RIGHTS will be available for purchase before and during the event. Please note that this event will not be livestreamed.

Gregory T. Moore is one of the nation’s leading voting rights leaders and advocates with a long and distinguished history of political empowerment and issue advocacy. He has served in several leadership positions throughout his many years of grassroots organizing and program development at the local, state and national level. He is currently the President and CEO of the Promise of Democracy Foundation, Inc., 501(C) (3) non-profit organization committed to expanding voting rights and continuing his work of breaking down barriers to full participation in American Democracy.

Moore served 17 years as the Executive Director, and Custodial Operational Manager of the NAACP National Voter Fund, (NVF) the 501 (C) (4) arm of the NAACP, from 2001 through 2018. During his tenure through the 2018 elections, Moore was responsible for the overall coordination of national programs designed to promote voting rights, election reform and issues critical to the NAACP.

Moore served five years as the Legislative Director (’93-94) and Chief of Staff (98-2001) for former Michigan Representative John Conyers, Jr. (D), who served as Ranking Member of the U.S. House Judiciary Committee,) and Dean of the Congressional Black Caucus. In these roles Moore directed the overall operations and legislative strategy for the Congressman with a special emphasis on civil rights, voting rights, election reform, campaign finance reform, and criminal justice reform issues.

In recent years Moore has worked through his foundation to develop new and innovative national and statewide voter engagement data-based strategies and models as tools for carrying on his commitment to empower disenfranchised communities and expand the right to vote for all Americans. Moore has lectured on college campuses across the US and received awards and recognition for his long-standing commitment to voting rights and expanding our Democracy at the local, state and national level. He is also the author of an upcoming book Beyond the Voting Rights Act, a memoir of his many years of voting rights advocacy work including his multi-year legislative efforts which helped secure the passage of the National Voter Registration Act, and other major legislative and election administration advances that protects the voting rights of all Americans.

Moore received his Bachelor of Science Degree from the Ohio University, College of Communications, in June 1983, with a major in Organizational Communications and a minor in Political Science. After over 30 years of advocacy work, he returned to higher education to complete his Master of Public Administration at the George Voinovich School of Public Administration at Ohio University in December, 2021.