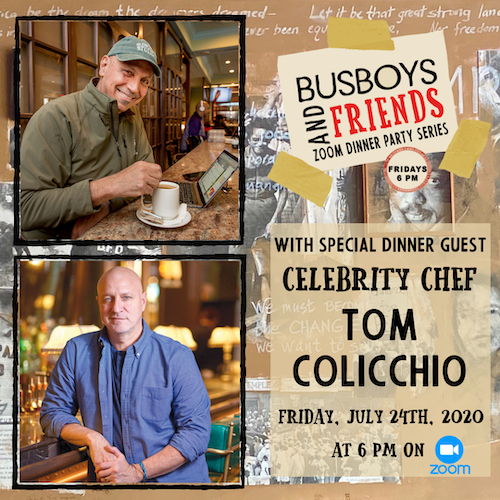 Tom appears in and served as executive producer on A Place at the Table, Participant Media's documentary about food insecurity in America, produced and directed by his wife, Lori Silverbush, by Kristi Jacobson. A Place at the Table, which premiered at the 2012 Sundance Film Festival and was released by Magnolia Pictures in 2013, has become the launchpad for a national movement centered on ending hunger in the United States.

In an effort to broaden his long-standing social and political activism, Tom co-founded Food Policy Action in 2012 in collaboration with national food policy leaders, in order to hold legislators accountable on votes that have an effect on food and farming. He has also been an outspoken voice on issues like GMO labeling and the use of antibiotics in food sources, and he continues to lobby for better anti-hunger policies in America.

Tom and his restaurants give back to the community by serving on the boards of Children of Bellevue, City Harvest, Wholesome Wave and Food Policy Action. He lives in Brooklyn with his wife, Lori Silverbush, and three sons. When he's not in the kitchen, Tom can be found tending to his garden on the North Fork of Long Island, enjoying a day of fishing or playing guitar.