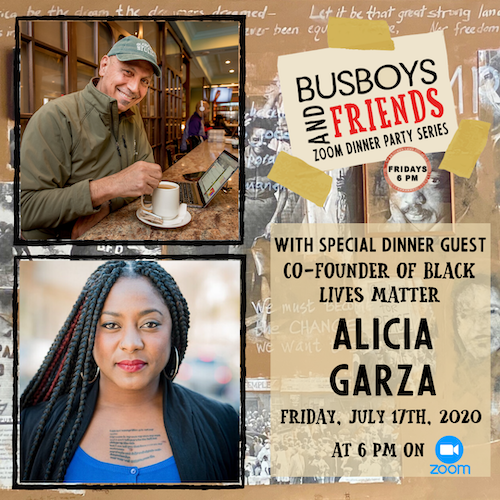 Alicia Garza is an Oakland-based organizer, writer, public speaker, and freedom dreamer who is currently the Special Projects Director for the National Domestic Workers Alliance, the nation’s leading voice for dignity and fairness for the millions of domestic workers in the United States. Garza, along with Opal Tometi and Patrisse Khan-Cullors, also co-founded Black Lives Matter, a globally recognized organizing project that focuses on combating anti-Black state-sanctioned violence and the oppression of all Black people.

Since the rise of the BLM movement, Garza has become a powerful voice in the media. Her articles and interviews have been featured in Time, Mic, The Guardian, Elle.com, Essence, Democracy Now!, and The New York Times.

In addition, her work has received numerous recognitions, including being named on The Root's 2016 list of 100 African American achievers and influencers, the 2016 Glamour Women of the Year Award, the 2016 Marie Claire New Guard Award, and as a Community Change Agent at the 2016 BET's Black Girls Rock Awards.

Most important, as a queer Black woman, Garza's leadership and work challenge the misconception that only cisgender Black men encounter police and state violence. While the tragic deaths of Trayvon Martin and Mike Brown were catalysts for the emergence of the BLM movement, Garza is clear: In order to truly understand how devastating and widespread this type of violence is in Black America, we must view this epidemic through a lens of race, gender, sexual orientation, and gender identity.

The Purpose of Power: How We Come Together When We Fall Apart is Garza's meditation on her education in organizing, and an essential guide to building transformative movements for the challenges of the twenty-first century, from one of the country's leading activist voices and a founder of Black Lives Matter.Purchase your copy today from Busboys and Poets Books here.