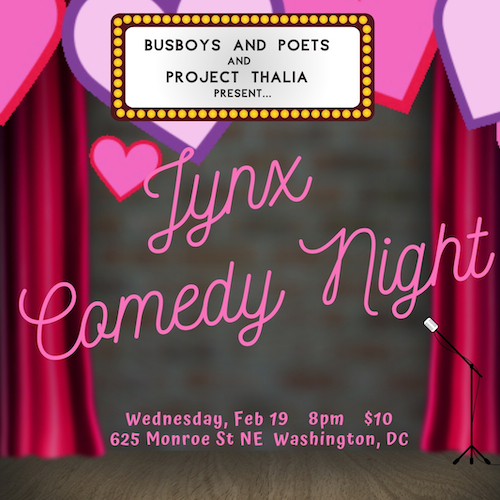 This February, fall in love with Jynx Comedy Night, where love is love is love. Practice self-care by taking yourself out to dinner and laughing the night away.

Our headliner this month, Violet Gray, has been featured on Night Train with Wyatt Cenac. Her comedy is characterized by bizarre observations on everything from race, gender and politics, to sci-fi, fantasy and tabletop roleplaying games.

Our lineup will also include:

Additionally, we are delighted that Misbehavin' Maidens, a bawdy, nerd-folk comedy band with a love of feminist, sex-positive music and LGBTQIA+ representation, will be joining us! With so much talent sharing the stage, you’re guaranteed to have a good time.

Check them out on social media:

Seating is first come first served. Full menu and bar will be available throughout the event.