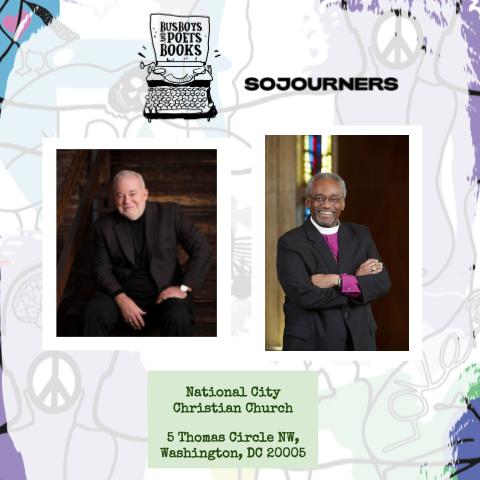 Join Busboys and Poets + Sojourners at The National City Christian Church on Wednesday, September 25th for a conversation between author Jim Wallis (Christ in Crisis) and Rev Bishop Michael Curry. Books are available for pre-purchase (pre-sale tickets include preferential seating), and will also be available for sale at the event.

Writing in response to our current “constitutional crisis,” New York Times bestselling author and Christian activist Jim Wallis urges America to return to the tenets of Jesus once again as the means to save us from the polarizing bitterness and anger of our tribal nation.

In Christ in Crisis Jim Wallis provides a path of spiritual healing and solidarity to help us heal the divide separating Americans today. Building on “Reclaiming Jesus”—the declaration he and other church leaders wrote in May 2018 to address America’s current crisis—Wallis argues that Christians have become disconnected from Jesus and need to revisit their spiritual foundations. By pointing to eight questions Jesus asked or is asked, Wallis provides a means to measure whether we are truly aligned with the moral and spiritual foundations of our Christian faith.

“Christians have often remembered, re-discovered, and returned to their obedient discipleship of Jesus Christ—both personal and public—in times of trouble. It’s called coming home,” Wallis reminds us. While he addresses the dividing lines and dangers facing our nation, the religious and cultural commentator’s focus isn’t politics; it’s faith.

As he has done throughout his career, Wallis offers comfort, empathy, and a practical roadmap. Christ in Crisis is a constructive field guide for all those involved in resistance and renewal initiatives in faith communities in the post-2016 political context.

Jim Wallis a globally respected writer, teacher, preacher, and justice advocate who believes the gospel of Jesus must be transformed from its cultural and political captivities. He is a New York Times bestselling author, widely recognized public theologian, renowned speaker, and regular international commentator on ethics and public life. He is the Founder, President, and Editor-In-Chief of Sojourners, and is the author of 12 books, including American’s Original Sin, God’s Politics, The Great Awakening, and The Call to Conversion. He served on President Obama's White House Advisory Council on Faith-based and Neighborhood Partnerships and has taught faith and public life courses at Harvard and Georgetown University. “Coach Jim” also served for 22 seasons as a Little League coach for his two baseball playing sons.

Presiding Bishop Curry maintains a national preaching and teaching ministry, having been featured on The Protestant Hour and as a frequent speaker at churches, cathedrals, and conferences around the country and internationally.

He has authored four books: The Power of Love (2018); Following the Way of Jesus: Church's Teachings in a Changing World (2017); Songs My Grandma Sang (2015); and Crazy Christians: A Call to Follow Jesus (2013). He was one of the subjects of In Conversation: Michael Curry and Barbara Harris by Fredrica Harris Thompsett (2017).