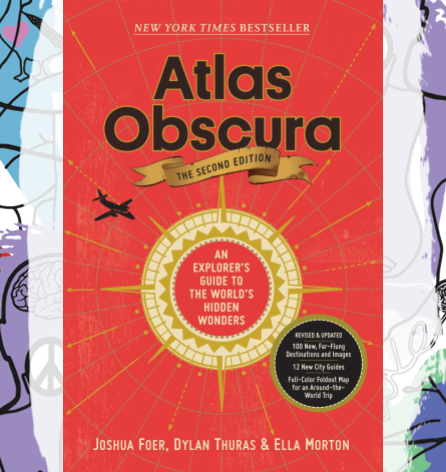 Atlas Obscura Trivia for the World’s Most Adventurous Explorers!

Atlas Obscura is here to find the greatest, most knowledgeable adventure nerds among you. Join us on Wednesday, October 16 at 7pm as we celebrate the release of ATLAS OBSCURA, 2nd Edition: An Explorer’s Guide To The World’s Hidden Wonders by Joshua Foer, Dylan Thuras, and Ella Morton with a night of trivia and stories about the most unusual, curious, bizarre, and mysterious places on earth.

With over 100 new entries and dozens of new photographs in this edition, the Atlas Obscura authors invite guests to come and test their knowledge of the wondrous and far-flung corners of the earth, hear amazing stories of unusual locations, and win prizes in this interactive trivia event with the authors of the bestselling book Atlas Obscura. From the location of the world’s largest glow worm colony to the number of human corpses decorating the... well, we've said too much already! Come answer questions with Atlas Obscura about geography, history, the world’s hidden wonders, and win the glory and the prizes you so rightly deserve.

When the first edition of ATLAS OBSCURA was released in 2016, it instantly became a national bestseller, taking readers off the beaten path to discover the strange and marvelous hidden wonders that exist all around us. Now completely revised and updated throughout, the second edition of this beloved travel book takes readers to even more of the most unusual, curious, bizarre, and mysterious places on earth with:

•16 new entries in Africa and Asia, including 16 for the Middle East and 9 for South Asia

•A calendar of interesting festivals around the world

Joshua Foer is the cofounder and chairman of Atlas Obscura. He is also the author of Moonwalking with Einstein: The Art and Science of Remembering Everything, a bestseller published in 33 languages, and a forthcoming book about the world's last hunter-gatherers. His writing has appeared in The New Yorker, National Geographic, Esquire, Slate, Outside, the New York Times, and other publications.