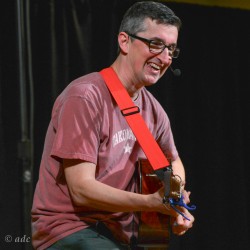 A Busboys and Poets in-house series! Rise + Rhyme is a weekly morning storytelling and performance series for children ages 5 and under, stay-at-home parents, and early rising families of all kinds.

Mr. Gabe performs nursery rhymes, folk songs, and modern favorites (such as “Yellow Submarine” and “La Bamba”) for children, ages zero to six. Based in Takoma Park, Maryland, he appears frequently at libraries, cafés, pre-schools, and performing arts centers throughout the DC area. He recently released Metro Train, his second CD of mostly original songs, which is credited to his band, Mr. Gabe and the Circle Time AllStars. His first CD, entitled Play Date, won a 2013 Parents’ Choice Recommended Award.

5 admission per child. Additional donations for the performer are much appreciated.

Rise + Rhyme is held every last Tuesday of the month @ 9:30 AM at Busboys and Poets in Shirlington and every Monday morning in Hyattsville, MD and Takoma, DC starting at 9:30 AM.