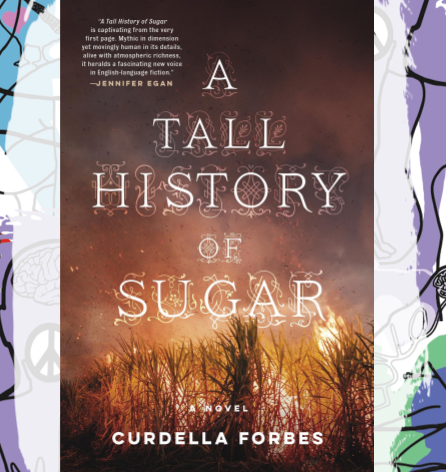 A Tall History of Sugar tells the story of Moshe Fisher, a man who was “born without skin,” so that no one is able to tell what race he belongs to; and Arrienne Christie, his quixotic soul mate who makes it her duty in life to protect Moshe from the social and emotional consequences of his strange appearance.

The narrative begins with Moshe’s birth in the late 1950s, four years before Jamaica’s independence from colonial rule, and ends in the era of what Forbes calls “the fall of empire,” the era of Brexit and Donald Trump. The historical trajectory layers but never overwhelms the scintillating love story as the pair fight to establish their own view of loving, against the moral force of the colonial “plantation” and its legacies that continue to affect their lives and the lives of those around them.

Written in lyrical, luminous prose that spans the range of Jamaican Englishes, this remarkable story follows the couple’s mysterious love affair from childhood to adulthood, from the haunted environs of rural Jamaica to the city of Kingston, and then to England—another haunted locale in Forbes’s rendition.

Following on the footsteps of Marlon James’s debut novel, John Crow’s Devil, which Akashic Books published in 2005, we are delighted to introduce another lion of Jamaican literature with the publication of A Tall History of Sugar.

CURDELLA FORBES is a Jamaican writer who lives in Takoma Park, Maryland, and teaches at Howard University. A Tall History of Sugar is her latest novel.