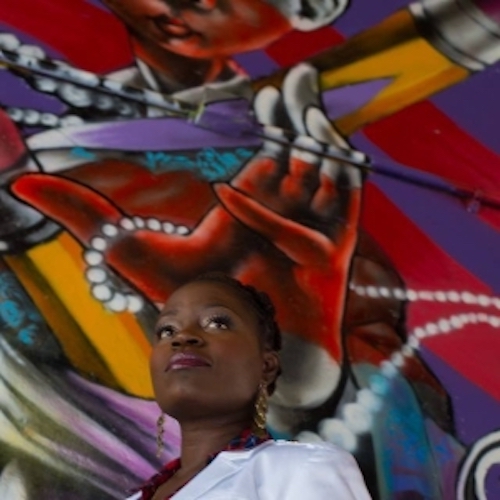 This week's Open mic at Ana is hosted by Miss Kiane Ink!

Although she is a social worker by profession, she is a poet by passion. In 1997, Dinahsta launched KIANE INK. She wrote cards, poems and other writings for special events and as special gifts. In 2005, she expanded KIANE INK to include the artistry of poetic performance in which she enjoys performing poetry at special events and spoken word venues. This year; however, Kiane Ink has evolved into a perfect fusion of Dinahsta’s professional and passionate interests offering cathartic/creative writing workshops, artistic community events and individual coaching. Kiane Inkprovides a platform for hope, healing and social justice through poetry and creative expression. Because writing served as a therapeutic outlet for her during her childhood and adulthood, Dinahsta believes that poetry can help others in a similar way. In her own words, “Poetry is my friend, my catharsis….my gift to the world….”

Jeffrey Banks is poetically known as "Big Homey". He's worked with notable people such as the late Fred "Rerun" Berry of What’s Happening!, Stellar Award-Winning Gospel Singer Maurette Brown Clark, GRAMMY-Nominated Soul Singer and Television Star Syleena Johnson, 2000 Olympic Gold-Winning NBA Legend Allan Houston, New Jack City Actor and Singer Christopher Williams, Gospel Trailblazer Dr. Bobby Jones & others. He’s been featured in national media such as ESSENCE Magazine, Sirius/XM Satellite Radio, Radio-One Inc., the CBS Early Show and BLACK ENTERPRISE Magazine. Big Homey's album, Exposed-The EP, is the poetic testimonial of the trials & victories of a Christian Believer. He's had the opportunity to perform across the USA & has done numerous engagements on East Coast college campuses. He’s a nationally-recognized event planner who was named one of the “Top 40 under 40” American Meeting Planners of 2013 by Rejuvenate Magazine. He has been a grant writer since 2008 and has been awarded numerous grants. He was a 2018 finalist for the DC Poetry Project in conjunction with the DC Public Libraries, the DC Commission on the Arts & Humanities and Day Eight. He has a Bachelor of Science Degree in Speech Communication from Syracuse University, an Event Management Graduate Degree from the George Washington University and a Master of Divinity Degree from Howard University. If not pursuing his poetry passion or other entrepreneurial endeavors, Big Homey utilizes his talents working with the young people in the DC metropolitan area.