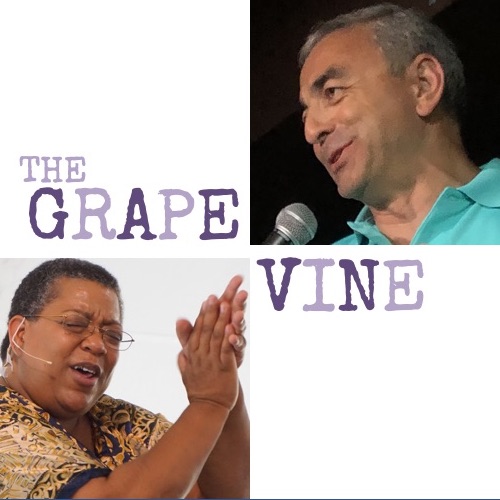 COME HEAR IT AT THE GRAPEVINE @ Busboys and Poets, Takoma SECOND WEDNESDAYS @ 7:30 PM! Tim Livengood and Noa Baum host The Grapevine Spoken Word Series. Celebrate the timeless Art of Storytelling, with Truths, Folktales, Rumors, and everything in between! $15 Suggested Donation

Sheila Arnold has been performing since she was 8 years old. Ms. Sheila, as she is fondly called, has been performing full-time since 2003, and travels nationally each year. She is fortunate to live close to her son, her grandson, and her father and stepmother.

Sufian Zhemukhov has performed his stories for WGBH, the National Storytelling Festival, the Washington Folk Festival, Story District, and The Moth. He tells about his personal experience as a first-generation immigrant in the U.S. and a university professor, which might be much funnier than you would expect.

Celebrate the Timeless Art of Storytelling, with Truths, Folktales, Rumors, and everything in between. Traditional or True its up to you! Join us at our Open Mic and set your story free.