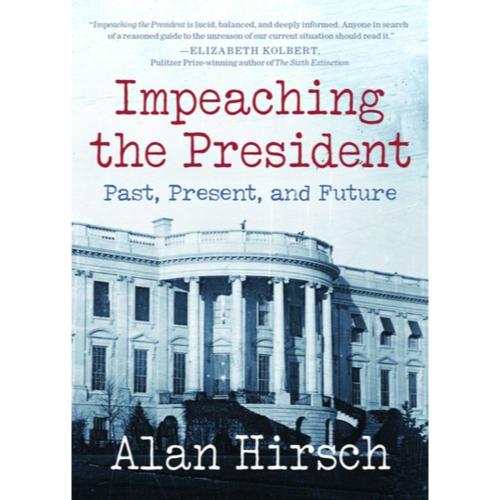 Robert Weissman will be in conversation with Alan Hirsch.

An historical look at the practice of impeachment, how it impacted the terms of Presidents Johnson, Nixon, and Clinton, and how it may affect Donald Trump.

It seems quite possible that President Trump will be impeached. Concerns about connections with Russia's attack on our elections, obstruction of justice, illicit business deals, and compromised classified intelligence dominate the news. Robert Mueller's fast-moving investigation has already resulted in arrests, indictments, guilty pleas, and high-level cooperating witnesses. Anything can happen.

In response to the complexity of a rapidly evolving situation, constitutional scholar Alan Hirsch offers clear and to-the-point guidance for all matters relating to removing a sitting president—from the Founder's constitutional protections against executive criminality and the instructive impeachment stories of presidents Andrew Johnson, Richard Nixon, and Bill Clinton, to the particular ways that Donald Trump may be legally vulnerable, and the possibilities and limitations of presidential self-pardon.

Illustrated throughout with historical engravings, photographs, and other impeachment documentation, Impeaching the President does not advocate for any particular course of action, nor make any predictions about Trump's future. Rather, this concise, timely, and accessible analysis offers historical lessons and a perspective on how the Constitution provides stability during times of political uncertainty and crisis.

Alan Hirsch, Instructor in the Humanities and Chair of the Justice and Law Studies program at Williams College, is the author of numerous works of legal scholarship and many books including For the People: What the Constitution Really Says About Your Rights (Free Press) (coauthored with Akhil Amar) and A Citizen's Guide to Impeachment (Essential Books). He received a J.D. from Yale Law School and B.A. from Amherst College. His work has appeared in the Washington Post, Los Angeles Times, Washington Times, Newsday, and the Village Voice. Hirsch also serves as a trial consultant and expert witness on interrogations and criminal confessions, testifying around the nation. He lives in Williamstown, Massachusetts.

Robert Weissman is a staunch public interest advocate and activist, as well as an expert on a wide variety of issues ranging from corporate accountability and government transparency, to trade and globalization, to economic and regulatory policy.