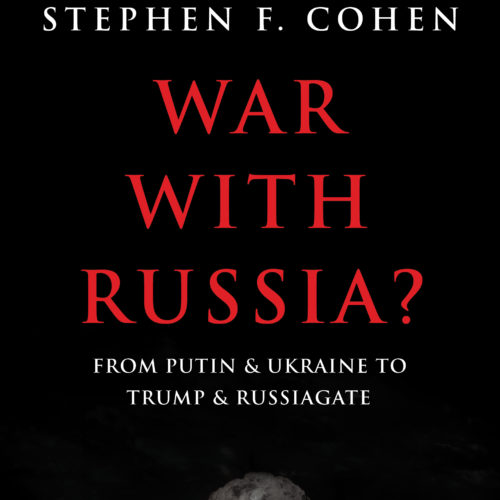 This event does not require a reservation, seats are first come, first served.

America is in a new Cold War with Russia even more dangerous than the one the world barely survived in the twentieth century. The Soviet Union is gone, but the two nuclear superpowers are again locked in political and military confrontations, now from Ukraine to Syria. All of this is exacerbated by Washington’s war-like demonizing of the Kremlin leadership and by Russiagate’s unprecedented allegations. US mainstream media accounts are highly selective and seriously misleading. American “disinformation,” not only Russian, is a growing peril.

In War With Russia?, Stephen F. Cohen—the widely acclaimed historian of Soviet and post-Soviet Russia—gives readers a very different, dissenting narrative of this more dangerous new Cold War from its origins in the 1990s, the actual role of Vladimir Putin, and the 2014 Ukrainian crisis to Donald Trump’s election and today’s unprecedented Russiagate allegations.

Cohen’s views have made him, it is said, “America’s most controversial Russia expert.” Some say this to denounce him, others to laud him as a bold, highly informed critic of US policies and the dangers they have helped to create.

War With Russia? gives readers a chance to decide for themselves who is right: are we living, as Cohen argues, in a time of unprecedented perils at home and abroad?

Copies of War With Russia? will be available for purchase in our bookstore before and after the event. Stephen will be signing copies of the book after the conversation.

Stephen F. Cohen is Professor Emeritus of Politics at Princeton University, where for many years he was also director of the Russian Studies Program, and Professor Emeritus of Russian Studies and History at New York University. His other books include Bukharin and the Bolshevik Revolution: A Political Biography; Rethinking the Soviet Experience; Sovieticus; Failed Crusade: America and the Tragedy of Post-Communist Russia; and Soviet Fates and Lost Alternatives. Cohen is married to Katrina vanden Heuvel, editor and publisher of The Nation, where he is a contributing editor.

Katrina vanden Heuvel is editor and publisher of The Nation, America’s leading source of progressive politics and culture. A frequent commentator on U.S. and international politics for ABC, MSNBC, CNN and PBS, her articles have appeared in The New York Times, The Los Angeles Times and The Boston Globe. She writes a weekly column for The Washington Post. vanden Heuvel is also the author of several books, including The Change I Believe In: Fighting for Progress in The Age of Obama.

vanden Heuvel has been recognized for her journalism and public service by organizations as diverse as Planned Parenthood, the National Women's Political Caucus, the New York Civil Liberties Union, the Center for Community Change, the Norman Mailer Center, the Eleanor Roosevelt Center at Val-Kill, American Rights at Work, Progressive Congress, and more. During her tenure, The Nation's journalism has been recognized for excellence by the National Magazine Awards, the Society of Professional Journalists, GLAAD, the National Association of Black Journalists, and the Webby Awards, among others.

vanden Heuvel serves on the boards of The Institute for Policy Studies, The Campaign for America's Future, The Roosevelt Institute, The Women’s Media Center, and The Sidney Hillman Media Foundation.