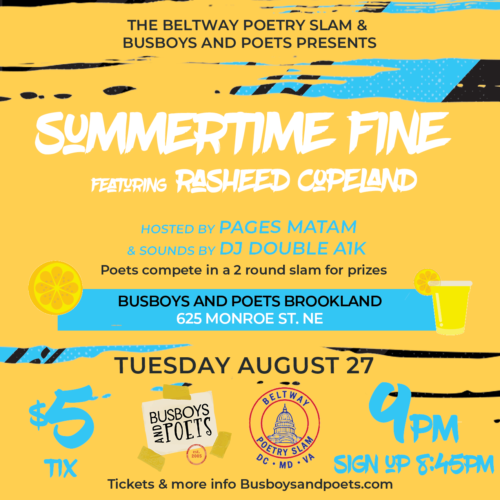 Rasheed Copeland is a native of Washington, DC. He is the author of The Book of Silence: Manhood As a Pseudoscience (Sergeant Press, 2015) and is a recipient of a 2016 and 2017 DC Commission of the Arts and Humanities Fellowship Award. He placed 2nd in the world at the 2015 Individual World Poetry Slam. He is currently studying English at the undergraduate level at Howard University. His work has been featured in online publications such as The Quarry and Public Pool. He has performed across the country and has been featured locally at renowned venues such as the Howard Theatre and the Lincoln Theatre.

ALL THOSE PARTICIPATING IN THE SLAM MUST ARRIVE BY 8:30 AND BUY THEIR TICKETS IN PERSON!!

$5 Cover. On the day of the event, tickets can be purchased online starting at midnight and in the restaurant starting at 10:00 AM (cash only). No refunds. Ticket purchase limit of 4 per person. Guests must have their wristbands (tickets) on upon entering the event.

The list for the night will be held by the Bout Manager. Poets MUST speak with the Bout Manager in person on the night of the slam to be placed on the list. Doors open 8:30pm. The slam list opens at 8:45pm. Slam begins at 9pm.

The draw will happen at 8:50 SHARP. If there is a lottery, the pull to determine who is slamming will also determine the order in which they will compete. Poets MUST be present at the time of the lottery/draw. If a poet’s name is pulled for a lottery and they are not present or very easily locatable, they forfeit their place and are not eligible for the bonus entry described above. If there is no lottery and a poet is not present or easily locatable during the draw, that poet will compete first; if they are still not present when their name is called during the first round, they will not slam that night.Speciality Slam Dates and Info:Team semi-finals:

Only top eight advance to finals in April. The top eight order also decides order of first round in Finals (i.e. if you won semis, you go last, etc…)

Top four make up the team with the Grand Slam Champion.Poets will compete in a three round slam (all three minute poems) where the four poets with the highest cumulative score will be named the team for the National Poetry Slam that year. Poets may not repeat poems from semi-finals. The team may opt to allow the 5th place poet on the team as an additional member.

Slam for WOWPS (Qualifiers, then Top Four in Finals) 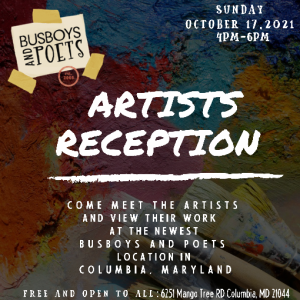 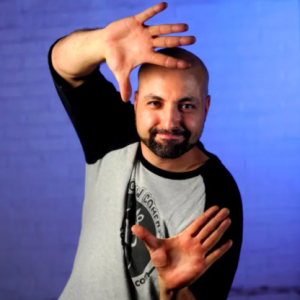