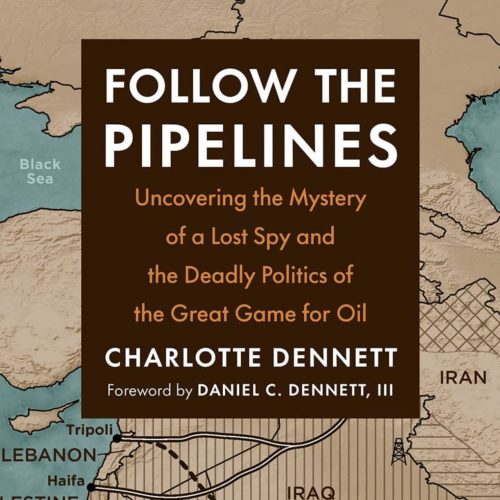 Join author Charlotte Dennett for a riveting discussion about her investigation into how oil interests and pipeline politics played a huge role in the endless wars in the Middle East...and now Ukraine.

Unraveling the mystery of a master spy’s death by following pipelines and mapping wars in the Middle East.

In 1947, Daniel Dennett, America’s sole master spy in the Middle East, was dispatched to Saudi Arabia to study the route of the proposed Trans-Arabian Pipeline. It would be his last assignment. A plane carrying him to Ethiopia went down, killing everyone on board. Today, Dennett is recognized by the CIA as a “Fallen Star” and an important figure in US intelligence history. Yet the true cause of his death remains clouded in secrecy.

In Follow the Pipelines, investigative journalist Charlotte Dennett digs into her father’s postwar counterintelligence work, which pitted him against America’s wartime allies—the British, French, and Russians—in a covert battle for geopolitical and economic influence in the Middle East. Through stories and maps, she reveals how feverish competition among superpower intelligence networks, military, and Big Oil interests have fueled indiscriminate attacks, misguided foreign policy, and targeted killings that continue to this day.

The book delivers an irrefutable indictment of these devastating forces and demonstrates how the brutal violence they incite has shaped the Middle East and birthed an era of endless conflict.

Follow the Pipelines also brings new questions to the fore:

Part personal pilgrimage, part deft critique, Dennett’s insightful reportage examines what happens to international relations when oil wealth hangs in the balance, and she shines a glaring light on what so many have actually been dying for.