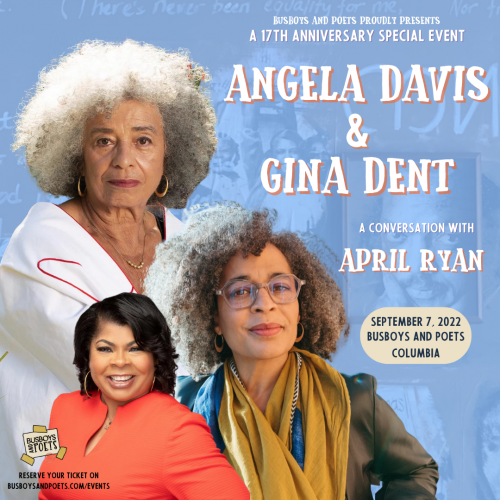 Angela Davis’ autobiography is one of the few autobiographies we have from Black Panther members- and like many other Black Panther members, while creating good trouble Angela was actively persecuted by the US government. As the third woman ever to be put on the FBI’s Top 10 Most Wanted list, Angela was a key figure in the fight for civil rights and prison abolition in the 20th century. She’s continued her activism and work into today, joining scholars like Gina Dent to release ABOLITION. FEMINISM. NOW.

We have the honor to be hosting Gina Dent and Angela Davis in-person to talk with us about their newest releases, what inspired them, and what’s next for our collective movement of abolition and civil rights here in the United States.

The pair will be interviewed by award winning author April Ryan.

Angela Y. Davis is Professor Emerita of History of Consciousness and Feminist Studies at UC Santa Cruz. An activist, writer, and lecturer, her work focuses on prisons, police, abolition, and the related intersections of race, gender, and class. She is the author of many books, from Angela Davis: An Autobiography (now available in a new edition) to Freedom Is a Constant Struggle.

Gina Dent is associate professor of feminist studies, history of consciousness, and legal studies at the University of California, Santa Cruz. She is the editor of Black Popular Culture, and lectures and writes on African diaspora literary and cultural studies, postcolonial theory, and critical area studies. Her current project "Visualizing Abolition" grows out of her work as an advocate for transformative and transitional justice and prison abolition.

White House Correspondent April Ryan can be seen almost daily on CNN as a political analyst. She is also the Washington D.C Bureau Chief on TheGrio. Her position as a White House Correspondent has afforded her unusual insight into the racial sensitivities, issues, and attendant political struggles of our nation’s past presidents. April Ryan is the author of the award-winning book, The Presidency in Black and White, and At Mama's Knee: Mothers and Race in Black and White . Her latest book is Under Fire: Reporting from the Front Lines of the Trump White House. Her forthcoming book Black Women Will Save the World: An Anthem is available for pre-order now.

FREE AND OPEN TO ALL. RSVP Requested. Seating will be available on a first come, first seated basis.

Full menu and bar service will be available throughout the event. This event is full-store.

If you cannot attend, this event will be live-streamed on the Busboys and Poets YouTube and Facebook page @busboysandpoets