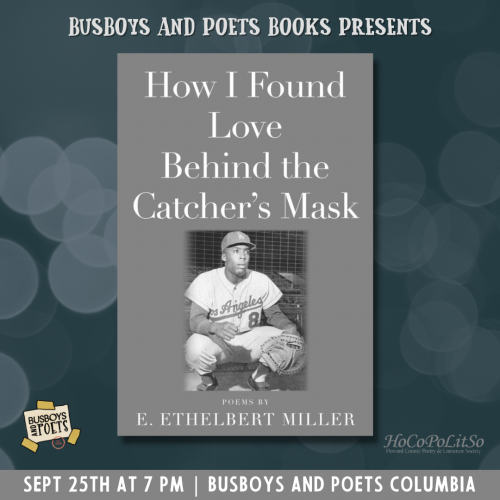 Busboys and Poets Books and the 2022 Lucille Clifton Reading Series Celebrates the publication of E. Ethelbert Miller's How I Found Love Behind the Catcher’s Mask (poems).

One can watch many baseball games before seeing a triple play. With this book E. Ethelbert Miller completes his baseball trilogy. How I Found Love Behind the Catcher’s Mask is a collection of poems that celebrates baseball by putting a spin on how the game brings meaning to one’s life.

Miller's book does not duck from examining the Black Sox Scandal, the career of Glenn Burke or the tragedy of Carl Mays. Miller’s own life at times is a playing field for sadness and what Ellington called “mood indigo.” But his love for baseball is a complete game and continues to reflect the hard heat of pleasure. After If God Invented Baseball and When Your Wife Has Tommy JohnSurgery and other Baseball Stories, this book, like a triple play, is a thing of beauty.    Free and open to all!

E. Ethelbert Miller is a writer and literary activist. He is the author of two memoirs and several books of poetry including The Collected Poems of E. Ethelbert Miller, a comprehensive collection that represents over 40 years of his work. For 17 years Miller served as the editor of Poet Lore, the oldest poetry magazine published in the United States. His poetry has been translated into nearly a dozen languages. Miller is a two-time Fulbright Senior Specialist Program Fellow to Israel. He holds an honorary degree of Doctor of Literature from Emory and Henry College and has taught at several universities.

Miller is host of the weekly WPFW morning radio show On the Margin with E. Ethelbert Miller and host and producer of The Scholars on UDC-TV. In recent years, Miller has been inducted into the 2015 Washington DC Hall of Fame and awarded the 2016 AWP George Garret Award for Outstanding Community Service in Literature and the 2016 DC Mayor's Arts Award for DistinguishedHonor. In 2018, he was inducted into Gamma Xi Phi and appointed as an ambassador for the Authors Guild. He was awarded a 2020 grant by the D.C. Commission on the Arts and Humanities. Miller’s most recent book If God Invented Baseball, published by City Point Press, was awarded the 2019 Literary Award for poetry by the Black Caucus of the American Library Association.

HoCoPoLitSo, The Howard County Poetry & Literature Society, is a community-based non-profit organization that brings the best of the world's writers to Howard County audiences and also produces the award-winning The Writing Life, a literary talk show, which is now a world-wide resource on YouTube.