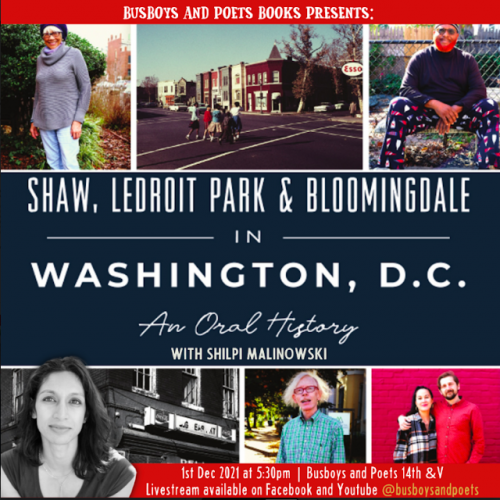 Join us for an important discussion on gentrification in the D.C area with Shilpi Malinowski and conversation partner Helena Andrews-Dyer

In her new text SHAW, LEDROIT PARK, & BLOOMINGDALE IN WASHINGTON D.C, Shilpi Malinowski takes us on a journey into one of D.C’s most gentrified areas. Throughout, residents tell you their experiences living in the neighborhood first hand. They take us through the changes they’ve seen, and the impact those changes have had. Gentrification in America is a big problem that’s been many years in the making. We’ll listen to Shilpi discuss her work as well as the issue at large with Helena Andrews-Dyer, a writer with a deep understanding of D.C and its culture. A project supported by the DC Commission on the Arts and Humanities, come join us for this engaging and vital conversation about the districts past, it’s changing present, and what that means for its future. This event is free and open to all, accessible through our Facebook and Youtube pages (@busboysandpoets).

Please RSVP if you are joining us in person or are interested in purchasing a signed book with shipping (limited to those tuning in via livestream).

Doors open to the Langston Room at Busboys and Poets 14th & V Street at 5:30 PM on December 1st. The program itself will begin at 6 PM with an introduction from Busboys and Poets Books Director of Operations, Lori Barrientos Sanchez, before we hear from Shilpi Malinowski and her conversation partner, Helena Andrews-Dyer. There will be time for Q&A with the audience before the end of the program, as well as the opportunity to purchase a signed copy of SHAW, LEDROIT PARK, & BLOOMINGDALE IN WASHINGTON D.C.!

When Gretchen Wharton came to Shaw in 1946, the houses were full of families that looked like hers: lower-income, African American, two parents with kids. The sidewalks were full of children playing. When Leroy Thorpe moved in in the 1980s, the same streets were dense with drug markets. When John Lucier found a deal on a house in Shaw in 2002, he found himself moving into one of four occupied homes on his block. Every morning, he waited by himself on the empty platform of the newly opened metro station. When Preetha Iyengar became pregnant with her first child in 2016, she jumped into a seller’s market to buy a rowhouse in the area. Journalist and Shaw resident Shilpi Malinowski explores the complexities of the many stories of belonging in the District’s most dynamic neighborhood.

Shilpi Malinowski is a reporter whose work has been published in the Washington Post, the New York Times and India Abroad. For the past two decades, she has been reporting on life in neighborhoods in D.C. and within the Indian American diaspora. With a background in anthropology, she investigates how people forge their identities and feel a sense of belonging as communities change around them. She lives in Shaw with her husband and two young sons and can often be found on neighborhood playgrounds. Shilpi received a fellowship from the DC Commission on the Arts and Humanities in 2021.This is her first book.

Helena Andrews-Dyer is a senior culture writer for The Washington Post, covering the intersection of popular culture, race, politics and art in the nation’s capital. In 2020, Helena was awarded two National Association of Black Journalists’ Salute to Excellence Awards for her longform feature “This Isn’t Another Horror Story About Black Motherhood.” Her third book, “The Mamas: Parenting in the Age of Everything,” will be released by Penguin RandomHouse in the spring of 2022. Helena’s work has appeared in Oprah Magazine, Marie Claire, Glamour, The New York Times, The Washington Post, The Washington Post Magazine, Essence, and OUT among other national publications. 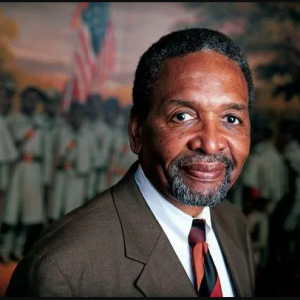 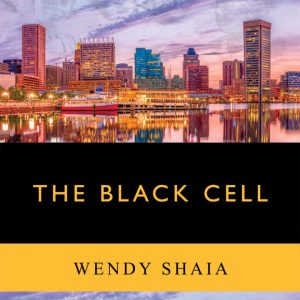 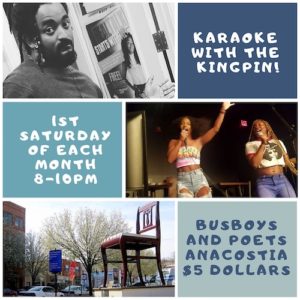 Karaoke Night Hosted by Dwayne B

Karaoke Night Hosted by Dwayne B 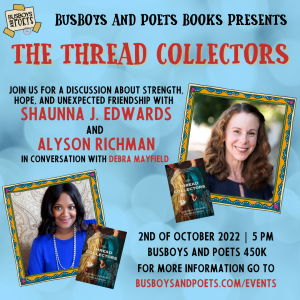