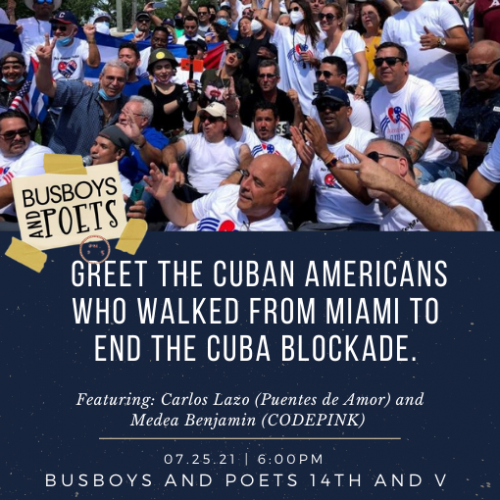 Carlos Lazo of Puentes de Amor (Bridges of Love) and six other Cuban Americans are walking 1,300 miles from Miami to D.C. on a pilgrimage to call for an end to the U.S. embargo of Cuba. Join Medea Benjamin of CODEPINK to welcome Carlos and the other pilgrims to D.C.!

Carlos is neither for or against the Cuban government; he is for the Cuban people and wants to end the cruelty of U.S. policy.

"We try to unite people, whatever their ideology, religion, race or nationality. The important thing is to take down walls that separate us and build bridges between our people." – Carlos Lazo

Among other things, he and the other pilgrims are calling for a lifting of all restrictions on sending remittances to their families back home; a restart to the program of family reunification that Trump suspended in 2017; the granting to U.S. citizens of the right to travel freely to Cuba; and robust economic relations, as well as scientific and cultural exchanges.

This event comes on the heels of protests in Cuba on July 11, which has ignited a debate about the embargo and U.S. policy. Joins us for this timely discussion!