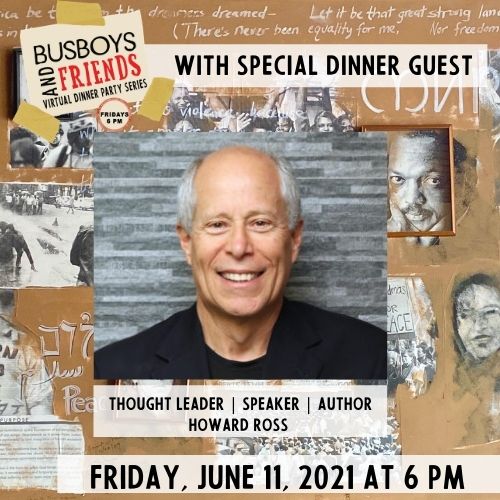 Join us online for Busboys and Friends: A Virtual Dinner Party held every Friday night at 6 pm. Hosted by CEO and Founder, Andy Shallal with a special dinner guest each week.

Howard Ross is a lifelong social justice advocate and the Founder of Cook Ross. He is considered one of the world’s seminal thought leaders on identifying and addressing Unconscious Bias. Howard authored the Washington Post best seller, Everyday Bias: Identifying and Navigating Unconscious Judgments in Our Daily Lives (published by Rowman and Littlefield in 2014) and ReInventing Diversity: Transforming Organizational Community to Strengthen People, Purpose and Performance, (published by Rowman and Littlefield in conjunction with SHRM in 2011). His new book, Our Search for Belonging: How the Need for Connection is Tearing Our Culture Apart, will be published by Berrett-Koehler in 2018.

Howard has delivered programs in 47 states and over 40 other countries carrying out the work of Cook Ross. His audience has included hundreds of Fortune 500 companies and major institutions within healthcare, government, and non-profit sectors, in addition to a variety of other industries. He has led programs at Harvard University Medical School, Stanford University Medical School, Johns Hopkins University, the Wharton School of Business, Duke University, Washington University Medical School, and over 20 other colleges and universities. From 2007-2008, Howard served as the Johnnetta B. Cole Professor of Diversity at Bennett College for Women, the first time a white man had served in such a position at an HBCU. He has been published by the Harvard Business Review, the Washington Post, the New York Times, Fast Company Magazine, Diversity Woman Magazine, Forbes Magazine, Fortune Magazine, and has been a regular guest on National Public Radio for more than 10 years. Howard has served on numerous non-profit boards, including the Diversity Advisory Board of the Human Rights Campaign, the board of directors of the Dignity and Respect Campaign, and the board of the directors for the National Women’s Mentoring Network.

Howard received his Bachelor of Arts in history and education from the University of Maryland and completed post graduate work in leadership and management at Wheelock College.

FREE, RSVP to receive a reminder notification and to reserve your book!