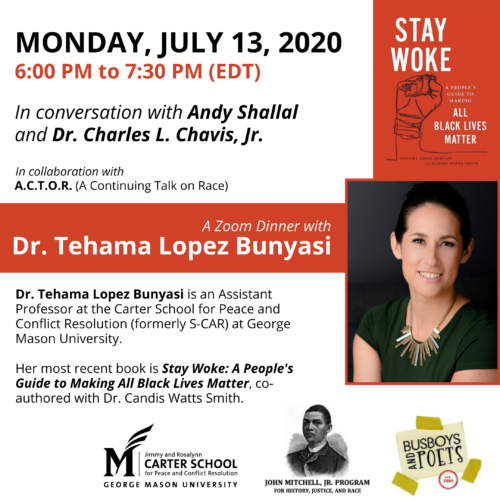 During this virtual event, Dr. Tehama Lopez Bunyasi, assistant professor at the Jimmy and Rosalynn Carter School for Peace and Conflict Resolution at George Mason University, will discuss antiracism in the United States.

This event is part of the A.C.T.O.R. (A Continuing Talk on Race) series at Busboys and Poets.

After you RSVP for this FREE event, you will receive an email for instructions on how to join via Zoom.

Want to support a social justice-minded business and its employees? Order your favorite meal and beverage from Busboys and Poets, set your table, and tune in for an engaging discussion.

Want to support programs that seek to realize racial justice through narrative change? Consider making a donation to support the work of the John Mitchell, Jr. Program, which includes supporting students who are committed to racial justice.

Tehama Lopez Bunyasi is an assistant professor at the Jimmy and Rosalynn Carter School for Peace and Conflict Resolution at George Mason University. A political scientist by training, her scholarship is broadly concerned with matters of race, racism, and antiracism in the United States, with specializations in structural inequality, racial attitudes and ideologies, racial marginalization, and the politics of whiteness.

In her book Stay Woke: A People's Guide to Making All Black Lives Matter (NYU Press, 2019), she and co-author Candis Watts Smith illuminate lessons from the current Movement for Black Lives to equip people to become effective racial justice advocates and antiracists. Blending together a wealth of scholarly work with critical reflections from popular culture, Stay Woke sheds light on the precarious nature of Black lives in the United States by unmasking structural racism and explaining how even well-meaning people can reproduce racial inequality. Created as a toolkit and written in accessible language, Stay Woke empowers its readers to become more knowledgeable participants in public dialogue, activism, and American politics.

Dr. Lopez Bunyasi's second book project, Breaking the Racial Contract: Privilege Awareness and the Politics of Whiteness (under contract with NYU Press) utilizes nationwide survey data and in-depth interviews with antiracist activists to explore the relationship between whites' perceptions of racial privilege and support for racially egalitarian policies and practices. In redirecting the study of racial attitudes to address the under-articulated side of racial inequality—racial advantage—this book maps out a constellation of critical resistance to the hierarchical racial order and brings attention to the not-fully-realized potential of privilege-cognizant politics.

Her article-length peer-reviewed research has been published in a number of academic journals, including Perspectives on Politics; Journal of Race, Ethnicity, and Politics; Politics, Groups, and Identities; Polity; Sociology of Race and Ethnicity; The Black Scholar; Chicana/o Latina/o Law Review; and Radical Teacher.

Dr. Lopez Bunyasi engages a broader audience on matters of American politics, racial disparities and racial violence by contributing commentary to a variety of national and international media outlets, including PBS, The New York Times, C-SPAN, NBC News, Voice of America, and the Scene on Radio podcast.

Prior to joining the Carter School, Dr. Lopez Bunyasi was a faculty member at Ohio University and held the Samuel DuBois Cook Postdoctoral Fellowship at Duke University's Center for the Study of Race, Ethnicity, and Gender in the Social Sciences. She is a recipient of the Ford Foundation Dissertation Fellowship and a supportive alumna of the Ralph Bunche Summer Institute. Most recently, she received the Career Enhancement Fellowship from the Andrew W. Mellon Foundation & Woodrow Wilson National Fellowship Foundation. She has a B.A. in American Government from the University of Virginia and a Ph.D. in political science from the University of Chicago.

The John Mitchell, Jr. Program for History, Justice, and Race is based at the Center for Peacemaking Practice at George Mason University's Jimmy and Rosalynn Carter School for Peace and Conflict Resolution. The program engages with museums, schools, local communities, and state and national partners to complicate historical memory, build peace, and promote racial justice. Find out more at https://www.johnmitchelljrprogram.gmu.edu.

Busboys and Poets is a community gathering place. First established in 2005, Busboys and Poets was founded by owner Andy Shallal, an artist, activist, and restaurateur. After opening the flagship location at 14th and V Streets, NW, the neighboring residents and progressive community embraced Busboys, particularly activists opposed to the Iraq War. Busboys and Poets is now located in seven distinctive neighborhoods in the Washington Metro. Find out more at https://www.busboysandpoets.com. 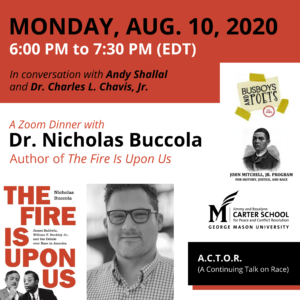