Busboys and Poets Director of Poetry Events Pages Matam is from Cameroon in Central Africa. Pages traveled a lot between Europe and Africa as a kid with his mother and moved to Northeast D.C. when he was 11 years old, then followed with many parts of Maryland before recently moving back to D.C.

You’ve been known to speak multiple languages? How many exactly do you speak and how do they inform your writing?

So i speak two of my native dialects from my home country of Cameroon, french, english, conversational in spanish, and trying to relearn German (which i used to take in school) and some japanese mainly through my ardent love and passion for anime and manga. For a long time i stayed away fro. My native dialects of Bamileke and Bangkon, and only did english. As of late i have been trying to write more in those languages, the ones closest to home, because one day it is my hope to be able to say the necessary poems i am writing of and to my people, in a way that they can best understand them, without feeling forced to use the colonizer’s language. It also changes the way i think about language and approach my craft when certain words dont exist in my native tongues. I love this very old, yet new relationship and experience with language i am undergoing now because of it.

You’ve been involved with sexual assault awareness activism, and one of your poems “Pinatas” went viral on such a topic. How does your activism impact your poetry?

Everything I do is connected to poetry. Along the same lines of a campaign i initially started years ago called Talk Ugly, I’ve been doing a form of art therapy work and having the necessary and difficult conversations through the medium of poetry with local organizations such as Safe Shores, and others like the Fort Wayne Sexual Assault Trauma Center, which provide a safe space for sexually abused survivors 21 and under.

Did you always know you want to be a poet?

I wanted to be a doctor. I did pre-med in college but it just wasn’t the way I wanted to help people, it was my someone else’s path for me.

Back home I didn’t know much about poetry, I thought it was just a thing old white men like Shakespeare did.  I knew about African novelist and singers, but not poets. It wasn’t until later than I made the connection between poets and storytellers. I got introduced to poetry through an episode of Power Rangers. One of of the female Rangers met a 16thcentury French dude who recited her poetry and she ends up falling in love with him. I was like, “Woah you can write poems and girls fall in love with you?” The next day I ended up writing a poem for a girl I was crushing on in middle school. She wasn’t interested in the corny immigrant boy who could barely speak English. Interestingly, we’re friends now, but she cant come to the show for free. -[snickers]

Later during a Black History month assembly in 9th grade I saw this young woman walk back and forth on stage, passionate, loud, rapping but not really rapping, deep. I was so enthralled. That was my first introduction to spoken word.  I joined the poetry club after seeing her and got introduced to Langston Hughes, Lucille Clifton, Maya Angelou, James Baldwin, Def Poetry Jam, and just in general: poets who looked like me. Representation is so important. I felt more validated in my story and my voice when i saw and read others who looked like me. Eventually i found my way to African poets as well, and saw so much beauty and poetry in even the singers and writers that I knew whom i never really connected in poetry either.

Poetry is supposedly this not very “masculine” thing. I used to think it was like something only women do, since it requires being in touch with your emotions, which well – is fucking dumb. Also like any other thing in this world, the patriarchy always finds its way into male domination of a genre and space so that whole idea of it only being a thing women do is very false. Nevertheless through proper mentorship (shoutout to all the dope adults who did and are STILL looking out for me and guiding me) poetry was the first time i allowed myself to shed the scales and weight of “false masculinity” and gendering in a way that I didnt need, and truly examined myself and my actions in relation to the world within and around mr.

You traveled a lot as a kid. How’s that shaped you?

My whole life has been very nomadic. My entire life is always filled with travel, and I have never really known stillness. I’m really efficient at packing. Now I can pretty much pack two weeks of clothes in a duffle, including a portable steamer.

What has to be in your duffle bag?

My essentials are my portable steamer, shea butter, coconut oil, box of jewelry and rings, cufflinks, bowties, and collar stays. So pretty much accessories and staying as my good friend Malachi says: “alive and well moisturized.” i usually always have at least one suit i can wear 3 ways, dress shoes, and a fedora of sorts. My belief, is that it is always better to be overdressed then underdressed.

When folks mention you, your style always comes up. Where did you get your fabulous sense of style from?

I blend a lot of African and European influences. As a kid my mom always had me in bowties. I understood it as if you want to be taken seriously and look classy you wear an all black bowtie.

Kind of sad story, but the first time I thought I was going to meet my father, I got all dressed up and put on a bowtie. When he didn’t show up I put the bowtie in a box and thought I’d never see it again. Fast forward a few years and I had to go to a graduation for my high school poetry club. I had to dress nicely and was looking at what I had to wear and I came across that bowtie, the same one I put away, and I wore it and liked it. Ever since then I’ve always done bowties. My mother is very adamant about us [me and my brother] looking the way you want people to see you as.

I’ve also always been very keen on smelling good, looking good and I am mildly OCD about it.  A lot of my good style is as a result of being teased throughout my youth. People teased how I would wear African clothes, or I smelled a certain way- by certain way i mean bad- which was mainly due to the smell of different traditional foods we would make at home made of powerful spices. So for a while I didnt event want to eat our foods and found myself wanting to reject some parts of my Culture. So I dressed super “American” with hiphop influence and some elements of Black culture, and bought colognes and worked hard on my “american” accent – oversized jerseys, Jordan’s, or Saucony’s that looked like Jordan’s, tried that du-rag thing. And then I went through this cool outsider kid, to do the preppy ivy league thing with vans or hot topic clothes and target Tshirts but again all of it just wasn’t me. I just was trying to fit into an American culture and thought that is what I had to do in order to be accepted by my peers. Glad I grew out of it and went back to a style that fits me.

Cant do brown shoes with black belt or brown belt with black shoes. And not everything has to match, sometimes you want to complement and create popping points of contrast.

What’s your favorite meal at Busboys when your hosting poetry?

Chorizo Pasta and the bread pudding with vanilla ice cream, well done, I like it a little burnt, a little crisp.

Teach us something new in 1 min

Books i am currently reading are BiPolar Faith by Monica Coleman, invisible man got the whole world watching by Mychal Denzel Smith and a bunch of comic books including the new Black Panther series written by Ta-Nehisi Coates.

Where can we find you or get in contact?

And every last tuesday 9PM for the Beltway Poetry Slam at Busboys and Poets Brookland, NE.

Remember to always love hard, and love yourself harder.

February saw the release of If God Invented Baseball, the latest collection of poetry from DC legend and literary activist E. Ethelbert Miller. A devoted fan of the Washington Nationals, Ethelbert celebrates in the book the magic of baseball and its lessons for life.  In advance of the poet’s upcoming event at Busboys and Poets … Continued 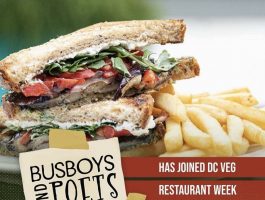