Busboys and Poets Books Review: From Headshops to Whole Foods

From Head Shops to Whole Foods by Joshua Clark Davis is a scholarly examination of activist entrepreneurs who use business as a tool to enact social and political change. It’s a far-reaching subject to dedicate this sort of academic rigor to, and the author limits his examination to four subjects: African American bookstores, head shops, natural food stores, and feminist businesses. Davis makes the point in the book’s introduction to acknowledge other activist businesses that, for the sake of brevity, are not examined, such as businesses linked to gay liberation, Marxist bookstores, labor movement businesses, and Chicano and Asian American businesses.
Emerging in the 1960s (or in some cases earlier) alongside activist movements, activist businesses operated as capitalist endeavors that defied the standard capitalist model of business operation, where the primary goal is the accumulation of capital in the form of exponentially increasing profits. Many businesses operated at a deficit and closed. Of the businesses that managed to sustain themselves, not all stayed true to their activist missions. Many companies became part of the system they were initially conceived to change. Such is the case with Whole Foods Market (originally named Saferway, a direct jab at chain grocery supermarket Safeway), which expanded beyond its modest and mission-driven origin as a natural foods store to become the book’s titular example of a large corporation using the language and image of activist businesses while operating in a typical capitalist manner.
In assessing the influence of activist businesses, Davis considers both their achievements and shortcomings. While some activist businesses operated as cooperatives and direct democracies, others imposed hierarchies that exploited workers, often with a reliance on underpaid or volunteer work.
Activist businesses, in combining cause and commodity, provide a template to the corporate world for the appropriation of movements, but also help to elevate such movements in the public consciousness. Black Power activists used bookstores to disseminate knowledge and defy stereotypes of black literacy and intellectual engagement. Feminist businesses were models for rejecting the patriarchal structure of corporatism. Natural food stores promoted vegetarianism, pacifism, environmentalism, and eating as a deliberate and impactful political act. And where would marijuana legalization and drug decriminalization efforts be today without the proliferation of head shops as a welcoming space for drug advocates?
From Head Shop to Whole Foods is well researched and carefully written, a scholarly work that demands thoughtful examination of the past and how activist businesses changed the language and politics of business. It’s a fascinating history that any reader will immediately recognize in the world around them.

This review is generously provided by Shirlington Bookseller James Ebersole

Angela Davis, Sonia Sanchez, Ben Jealous, Julian Bond, voice their support for President Obama but remind us that there is much work to be done 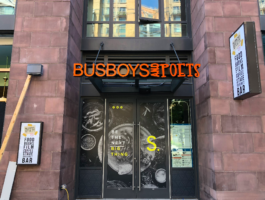