Busboys and Poets Book Review: Set the World on Fire

In this substantial entry into the history of Black radical politics, Keisha N. Blain uncovers the legion of Black women that made waves in the growing Black nationalist and Garveyite movements of the early Twentieth Century. Black nationalism, which promotes the establishment of a Black nation state as the answer to racial oppression, first gained traction with the teachings of Marcus Garvey in the 1920s. Within the ferment of the widely popular Garvey movement, Blain sheds light on the towering woman figures who, despite the patriarchal chauvinism present within Garvey’s Universal Negro Improvement Association (and Garvey himself), were able to rise to positions of power within the movement and leverage their influence so other woman could do the same. Most importantly, Blain shows us how these women took the political and mobilization tools they gained during their involvement with the Garveyism to advance the cause of Black liberation long after the decline of Garveyism in the early 1930s.

Rescuing these scarcely known women from obscurity, Blain makes use of a plethora of source materials, census records, documents and first-hand accounts, to reconstruct their lives and seamlessly weave together their stories.There was Mittie Maude Lena Gordon, a Black woman who led a huge back to Africa campaign in Chicago during the 1930s and founded the Peace Movement of Ethiopia. Then there was Celia Jane Allen, the intrepid nationalist organizer and poet who mobilized Black people in Jim Crow era Mississippi dispite being monitored by the FBI. Then there was Adelaide Casely Hayford, the dedicated and outspoken Sierra Leonean who played a substantial role in the Garvey movement in Sierra Leone before breaking away to become a distinguished speaker and advocate of women’s rights in West Africa. All of their activities were connected by what Blain describes as a “proto-feminism” that pushed for equality along gendered lines and predated the Black feminist movements of the 60s and 70s.

Blain’s rich narrative writing takes us with ease through the details of these women’s lives without bogging us down with heavy historical facts. Yet the texts is deeply well-researched. Blain proves once again that Black women and their invaluable contributions have been foundational to the development of Black radical movements.

Our thanks to bookseller Dubian Ade for this review. 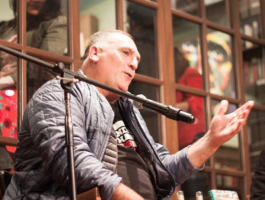 “I think the true meaning of leadership is recognizing your weakness, so you can make them your strong points.” On October 30, we had the pleasure of hosting Chef José Andrés at our 450K location. The conversation moderated by founder Andy Shallal with Chef Andrés, discussed the humbling story of why he went into cooking, … Continued

“Hey Dude” I finish my communing with the majesty of this wild, magnificent slice of earth and head to the other side of this narrow metal wonder of a bridge. My legs are still noodles but a bit more steady. My face is flush. My body is intact. My mind is calm. And I am … Continued

1. Challenge racism. Family and close friends is a good place to start. Try “calling them in” before “calling them out”. Use the “I” language. Engage, don’t retreat.